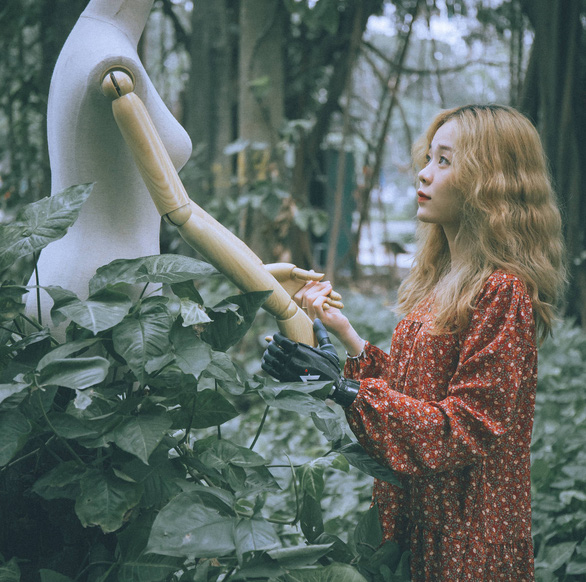 After many years of living in silence and loneliness due to the complexity of her disability, at the age of 21, Pham Thi Thuy has new confidence thanks to her role as a brand ambassador for a robotic hand product.

Thuy, who is originally from the central province of Nghe An and is now living in Hanoi, was born with a disability.

Thuy’s mother took some medicine without reading the instructions carefully during her pregnancy. Despite doctors finding nothing abnormal after the mistake, unfortunately, Thuy was born without a left hand.

Turning her weakness into an advantage

Thuy forced herself to live in isolation growing up because of her physical handicap and always tried to cover her missing hand when she had to appear in public.

“My mother is extremely sad, given that there has never been anyone with a disability like me in our family,” recalled Thuy.

“I felt deeply pitiful when I was a child. Usually, I was teased by my peers, especially at my elementary school,” she added.

Although Thuy did not suffer teasing during the following years both at secondary and high schools anymore, she still lived with a broken heart.

She did not even like to visit crowded places, let alone stand on stage and perform like she dreamed.

She decided to go to the central city of Hue with the hope of leading an independent life after graduating from high school.

Unfortunately, the new environment did not make her feel better. Thuy continued to keep her life in private and silent spaces as before.

Feeling that she could not adapt to life in Hue City a few months later, Thuy came to a decision to move to Hanoi to find another opportunity. At that time, she was just 18 years old.

In spite of so many difficulties, Thuy found a job to earn her living.

She enrolled in a Chinese course after work and looked for better jobs online.

“First, I thought I would be rejected because of my disability,” remembered the young woman.

“But I tried to apply for the job. It was remarkably fortunate for me to be recruited by Will to Live Center, where I have worked for since then,’ she added, referring to the Will to Live Center (or Dream Seed Center) based in Hoang Mai District.

During her work with coworkers at the center, who are disabled, too, Thuy found that no one was suffering the same nightmare as her.

She has learned many valuable lessons, among them is how to turn her weaknesses into advantages by trying to make herself better a little bit each day.

“I used to think that my disabled hand was very ugly, which made me look extremely pitiful while standing before others,” she said.

“I don’t think about that hand anymore, there is no problem with it. In some cases, it is even cool to take photos with it,” Thuy continued.

Thuy can still work from home these days amid the ongoing COVID-19 pandemic in Hanoi. Her right hand can perform easily with the mouse, at the same time, the left hand can support with Control, Shift, Caps Lock, and Tab keys.

Thuy said her left hand can press any key on the keyboard although its speed is not as quick as a normal one.

“At the beginning, my left hand felt so weak that I could only press very slowly,” she said.

“But I was very motivated by the teachers. In addition, I tried my best to practice after looking at others doing their tasks. Until now, I can do well with my work on the computer. Besides, I am also good at using Photoshop,” she added.

Thuy has worked for the Will to Live Center for over two years. She not only earns her living on her own but also sends money to help her grandparents who live in the hometown of Nghe An.

Thuy’s parents divorced when she was a child. She was raised by the love of her grandparents, who have always devoted their lives to their grandchild.

Due to the grandmother’s advice on how to live independently without the left hand, Thuy could learn to take care of herself when she left home for Hue and then Hanoi.

In 2020, Thuy was introduced by a coworker to partake in a project offering free robotic hands to the disabled.

Thuy was invited to be a brand ambassador for the company’s robotic hands.

The unexpected opportunity has transformed Thuy into a different person. She has actively participated in key activities like photoshoots, promotion campaigns, launching events of new products and updated versions, instead of living silently like before.

Thuy does not have to try to cover her disabled left hand anymore. She poses confidently before cameras as well as on stage now.

“Before, I lived in loneliness and I was fearful of being seen by others in public. It is totally different now,” she said.

Thuy dreams of becoming a photo model in the future and she has tried each day to make it come true, despite so many obstacles she would have to surmount.