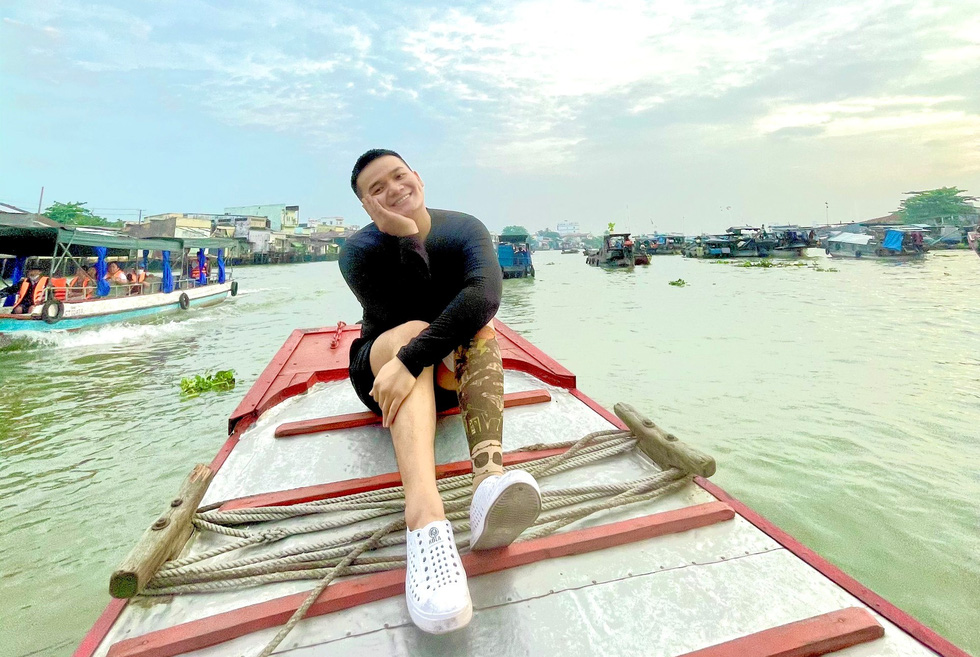 Nguyen Van Luu may have some difficulties walking on his prosthetic leg but that does not stop him from trying to give back to the needy.

While many might have given up on themselves, Luu chose not to surrender to his disability and instead tried to make the best possible use out of his hands and remaining functional leg.

The 28-year-old Vietnamese man, a resident of Ngo May Town, Phu Cat District in the south-central province of Binh Dinh, is always ready to hit the road as soon as he learns of an individual or household in need of his help.

Using his prosthetic leg, the young man has been traveling around Vietnam over the past five years and raised money to help those inflicted with critical illnesses or in difficult circumstances.

Angel with a broken wing

In early March, Luu was visiting a poor family in Tan Phuoc Ward, Phu My Town in the southern province of Ba Ria-Vung Tau.

According to Luu, three out of the four family members were suffering serious illnesses.

Nguyen Thanh Sang, 44, used to be the family’s breadwinner.

Despite being diagnosed with liver, kidney diseases and diabetes, Sang still worked himself to exhaustion to support his family.

When he was working at a quarry, stone debris landed in his eyes.

As the accident left him blind in one eye and his body in constant, excruciating pain, the man has been unable to work to provide for his family over the past several years.

The sickly, emaciated woman struggles to provide food and support for their two children, especially the youngest daughter, Tham.

The seven-year-old girl, who often writhes in pain after toilet use from a severe intestine problem, has suffered the condition without any medical treatment due to poverty.

Without a place to live, the family takes shelter in a shed illegally erected on a mountain.

Luu said after staying with the family for three days and verifying the story, he would make a call for donations on his Facebook page.

He sees a part of himself in these plights and cannot turn a blind eye.

Luu shared that he can never forget how his carefree, rewarding life as an employee at a jewelry company in Ho Chi Minh City turned to tragedy when he had an accident in Phu Nhuan District.

With no relatives by his side, the young man, then 23, was terribly upset at how nonchalant and unhelpful bystanders were at the site of his accident.

He himself got a ride to the hospital and gave his own approval signature on the amputation of his leg.

The next day he woke up, he realized he no longer had two legs to walk on.

“It really hurt knowing I would be disabled from now on,” Luu recalled.

“My mom passed out seeing my leg was gone."

“I told myself to move forward with my life and not upset my mom further.”

Realizing the unconditional love of his family and friends can help him through anything, the young man returned to his hometown.

Appreciative of encouragements and donations from strangers later, Luu realized not all are indifferent and set his heart on giving back.

He soon found himself preparing vegan meals at a pagoda near his home.

In 2018, Luu went to Vinh Yen City, the provincial heart of northern Vinh Phuc Province, where he learned the craft of artistic tattooing.

Noticing an old man living alone in a shabby home, the young man would come over and clean up his place, which stank of human and cat feces and rotten food.

Though the senior man, who suffered senile dementia, sometimes scolded him, Luu kept coming to his place, buying him new clothes and bedding and fixing things around his home.

“That’s how I started my volunteer calling,” Luu said.

When it was time for him to return home as his tattoo course was coming to an end, he made posts on Facebook, hoping to find someone who could replace him in tending to the old man.

“My posts were widely shared, I was interviewed by reporters,” he said.

When the old man passed nearly one year later, Luu went back to Vinh Phuc and helped hold his funeral.

'I hope no one else will need my help'

Over the past five years, Luu has always gone to great lengths to visit the needy’s places and verify their stories through neighbors and local governments to make sure philanthropists will not regret their choices.

Luu was also active in reaching out to those hard hit by the COVID-19 outbreaks late last year.

His most memorable encounter was with Nguyen Van Dung as Luu spotted him treading heavily when he was driving from Quy Nhon City to Ngo May Town.

Luu said he took Dung to his own home before providing him with some food, money, and a bicycle.

“I really wanted to give him a motorbike but my financial condition didn’t allow that,” he said, adding he did not post Dung’s story on Facebook for fear he might disturb philanthropists at small hours.

“Until now I still feel guilty about not giving Dung more help.”

Earlier this year, Luu traveled to Ho Chi Minh City to visit 13-year-old Nguyen Thi Hoang My, who is receiving treatment for cancer at the Oncology Hospital.

The girl, from Hau Giang Province in the Mekong Delta, lost her father when she was just two.

My’s extended treatment has worn on her mother financially and physically.

Three days after his posts were made, Luu managed to raise more than VND190 million (US$8,310) for My.

Shortly after that, the man found he was infected with the coronavirus.

As soon as he recovered in Ho Chi Minh City, he went straight to Ba Ria-Vung Tau Province, approximately 120 kilometers away, where his help was much awaited.

The man with the golden heart’s aid route is taking him to the Mekong Delta in a few days.

Though he vows to continue with his mission, deep within Luu hopes he will no longer receive texts from people asking for help for the poor.

“Receiving no texts means there will be no more needy people,” he explained.

Over the past five years, with Luu’s help, his beneficiaries have received quite a handsome sum.

In early 2022, he managed to raise over VND840 million ($36,739) for nine-year-old Nguyen Tran Thao My and her five-year-old sister, Nguyen Tran Kim Ngan, residing in the central province of Quang Ngai.

The young girls lost both their parents who died in a road accident in Binh Dinh when they were on their way home for the Tet (Lunar New Year) holiday.

Their family is more than grateful for Luu's help.

“My grandchildren lost their parents but have found love from everyone through Luu.”

Huynh Van Bac, from Hoai An District, Binh Dinh Province, father of Huynh Thi Kim Thao, shared following her birth of twins, she was struck down by pleural effusion.

After a two-month treatment at Binh Dinh General Hospital, her condition worsened and she suffered heart and kidney failures.

With doctors saying Thao would be unlikely to make it, the financially drained family was about to sell their house.

To her family’s elation, Thao has pulled through and made a remarkable recovery.

“Luu not only saved my daughter’s life but also helped bring us a new beginning,” Bac said.

In 2020, the Central Committee of the Vietnam Youth Federation honored Luu as an exemplary youth with physical challenges.