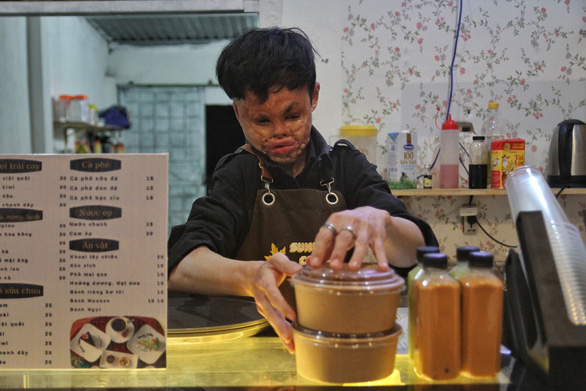 After suffering severe burns across his face as a child, Ngo Quy Hai, a 27-year-old from Vietnam’s Central Highlands, has managed to shed the physical and emotional burden of his injury and become the successful owner of Sunhouse Coffee – a well-known pastry shop in Plei Kan Town, Ngoc Hoi District, Kon Tum Province.

Hai burned his face when he was just a few months old after falling out of a walker and landing face first on a boiling pot of porridge.

His parents rushed him to Children’s Hospital No. 1 in Ho Chi Minh City where he received medical treatment for almost two years.

While doctors at the hospital were able to save Hai’s life, his injuries left him so scary that other children refused to play with him.

Hai’s parents pulled him out of school as a first grader to keep him from being bullied by other children and the result was that Hai became a recluse, worried that strangers would tease him for his injuries.

Hai eventually made friends with Hoang Xuyen, a neighborhood boy who was born deaf and mute, and the two were able to bond over their disabilities.

When they turned 10, Hai and Xuyen found themselves captivated by the cakes on display at a bakery in Kon Tum City, the capital of the namesake province.

“We were so excited by the cakes because we had only ever really stayed at home our whole lives,” Hai said.

“All we could do was to stop and stare because the cakes were so expensive.

“We spent the next two months saving up our money so that we could revisit the shop and buy a cake.

“When we finally had enough money to buy one, we tried to go to the shop but the parking attendant wouldn’t let me in because of my face.

“When the parking attendant finally let us in, a staffer at the shop kicked us out.

“All we could do was cry and go home.

“I felt depressed but also promised myself that I would one day open a pastry shop so I could serve disabled customers like myself.”

Hai’s life changed in 2016 when an acquaintance introduced him to Interplast-Germany, a German charity that was working with Hue Central Hospital in central Vietnam to provide free plastic surgery for patients with facial deformities, cleft lips, and cleft palates.

Because Hai’s case was so severe, Interplast-Germany decided to bring him to DiaKonie Krankenhaus Hospital in Germany where they treated his facial scarring for six months, free of charge.

“My family was happy because my younger brother was able to receive medical treatment, but we were all anxious as we couldn’t join him," Hai’s brother, Ngo Quy Hung, said.

“We had already sold all our land to pay for his past medical costs.

“We worried about him being alone overseas, but we were lucky because there was a kind Vietnamese woman living in Germany who helped to take care of him.”

Hai still remembers the day he had his first surgery in Germany.

It was snowy and bitterly cold outside, he recounted.

“After the first surgery, I was put into a coma for 21 days," Hai said.

“My entire face, except for my eyes, nose, and mouth was bandaged. I started to imagine my post-surgery face and the day I would no longer suffer from discrimination.

“Then came a wave of homesickness. I missed my parents. I spent the following days living in hope that my face would return to its normal state.

“After 14 surgeries and six months of treatment, my face was still full of scars but no longer attached to my chest.

"I was able to move much more easily.”

Hai finished treatment in Germany at the end of 2016 and returned home confident that it was time to begin his dream of opening a bakery shop.

Learning to read at the age of 23

Upon his return to Vietnam, Hai found it difficult to gain admission to vocational schools, primarily because he had never learned to read.

He eventually got connected with the KOTO humanitarian vocational training center in Hanoi, where he studied until 2:00 or 3:00 am each night to catch up on the schooling he had missed.

Nguyen Thi Huong, a classmate of Hai at KOTO, said, “It took quite a while for Hai to open up to the rest of the class.

"As we talked to him more, we found out just how hilarious he is."

After graduation, both Hai and Huong moved to Ho Chi Minh City to look for jobs.

Hai was first offered a job at a restaurant in District 7.

He then moved to a European restaurant and, over the next two years, worked hard to build up his confidence in the job.

Still, he eventually became exhausted from the hustle and bustle of city life and chose to return home.

“I loved the peaceful atmosphere in my hometown so I decided to come back to Kon Tum in April last year so that I could be closer to my family and hopefully fulfill my dream of opening a bakery,” Hai said.

With his savings and his family’s support, Hai opened a small shop selling cakes and drinks on Hung Vuong Street.

His small business, however, met trouble when COVID-19 gradually pulled customers away from his shop.

“I hope my life story encourages disabled people like me to look on the bright side and love their lives,” Hai said.

Desire to pay it forward

Hai shared that he wants to learn how to make more types of cakes and drinks so that he can attract more customers.

He plans to offer assistance to other disabled people once his work becomes more stable.

Hai and his friends have also formed a charity group named Sunhouse that provides support to orphaned and disadvantaged children in Kon Tum.