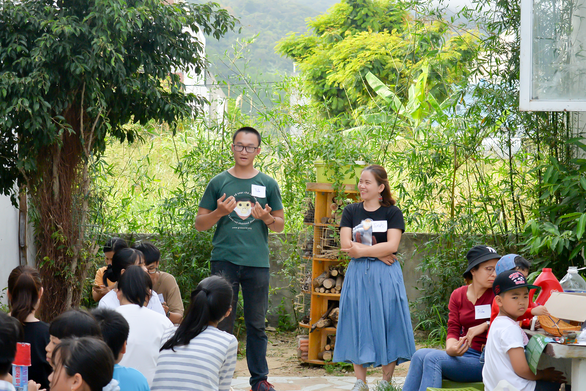 Vietnamese trader of reptiles turns himself into wildlife conservation volunteer

Previously, he was a wildlife trader who had heavily invested in a facility to keep and take care of reptiles as a hobby.

“Seeing my family members keep monkeys in captivity since I was little, I thought that there were only two ways to see monkeys: keeping them in a cage and watching them on TV,” Tuan started his story.

Tuan joined a club of reptile breeders in Da Nang when he was a middle school student.

After a while, he became a connoisseur of reptiles and switched to trading the reptiles with the members of the club.

The schoolboy even tried trading elongated tortoises which are classified as a critically endangered species and on the brink of extinction.

During his trips to the Dong Giang mountainous area in the central province of Quang Nam, Tuan hooked up with local wildlife traders and purchased tortoises offered by local people at high prices.

He brought home tens of precious tortoises from each trip to the mountains.

“It wasn’t until the local people could not supply enough tortoises to me that I realized the scarcity of the reptiles," Tuan recounted.

“And this gave me pause for thought.”

Back in the summer of 2017, during his trip to Son Tra Peninsula in Da Nang, Tuan stood still for a while when seeing brown shanked douc langurs in person, wondering why he had to keep wild animals in cages when they were obviously doing well in their natural habitats.

He began looking up more information on the Internet and realized wild animals should belong to the wild.

They are unlike domesticated animals such as dogs and cats that will be happy if people keep them in cages, feed them, and treat them as pets.

Tuan seemed more environmentally conscious and remorseful for the harm that he had done to nature.

He told himself that he had to do something to make amends.

The boy went to GreenViet Center, where there are many programs on researching and protecting Son Tra Peninsula, especially the brown-shanked douc langur.

Shortly after that, Tuan signed up to become a GreenViet volunteer, which offered him a chance to meet and get inspired by the community of environmental activists in Da Nang and other central provinces.

In 2018, he made up his mind to register to be a volunteer of ENV Da Nang, under the non-governmental organization Education for Nature – Vietnam, which focuses on wildlife conservation.

Among people behind wild animal rescues

Tuan said what marked his dramatic change is that he closed his room designated for breeding his favorite reptiles and released them back into the wild.

He also gave away those that lost their survival behaviors.

At ENV Da Nang, Tuan joined the survey team to go to locations where wild animals were allegedly kept in captivity.

Many times, he met his old friends who are members of the reptile club, which made him a bit confused, but he was determined to convince them to change their mindset about wild animal protection.

Tuan began sharing with the most influential members of the club about wildlife conservation so that these members could inspire the rest and encourage them to switch to collecting species that can be bred, instead of wild-collected endangered ones.

During his time at ENV Da Nang, thanks to the knowledge about breeding wild animals that he gained before, Tuan found it easy to role-play as various characters such as a collector asking to buy wild animals and a tourist or an event organizer in order to examine drinking establishments that allegedly traffick in rare animals.

Tuan and his ENV Da Nang associates have visited hundreds of restaurants and drinking places suspected of trafficking wild animals to get more information and report to his organization.

Approaching such places to find out information linked to illegal wildlife trade was tough and quite dangerous indeed, but to Tuan, having a chance to contribute to wildlife conservation efforts makes him happy.

Whenever the hotline of his organization receives information related to illegal wildlife trade, the survey team is notified and works to verify the report before keeping authorities informed for further investigation.

If he discovers anyone keeping wild animals in captivity, Tuan often advises them to voluntarily release the animals back into the wild.

For emergency cases, he rescues the animals by himself.

Tuan recalled that he had to ride his motorbike on a rainy night from Da Nang to a mountainous area in neighboring Quang Ngai Province to save a loris, a rare and endangered animal.

He added that there were several times his heart almost jumped out of the chest as he was at risk of being beaten when making efforts to rescue wild animals.

The failed rescues, however, gave him lots of invaluable experience.

Tuan said he could not remember how many animals he attempted to return them to their natural habitats.

He is now the chairman of the wildlife conservation club under ENV Da Nang.

Aside from his job at ENV Da Nang, Tuan is a familiar face at exhibitions and events raising public awareness about wildlife conservation.

Besides his job at the club, Tuan has made enormous efforts to help address the livelihoods of mountainous residents.

According to him, people of ethnic minority groups are closely culturally connected to forests, but they have had to search for rare animals to sell to make ends meet.

Therefore, Tuan sought measures to help them earn money by recommending them to plant Ba ji tian, scientifically known as morinda officinalis, on tens of hectares of forest.

He supplies the input materials and handles the consumption for ethnic minority people in the mountainous regions in Quang Nam and the Central Highlands to help them generate a long-term and stable income.