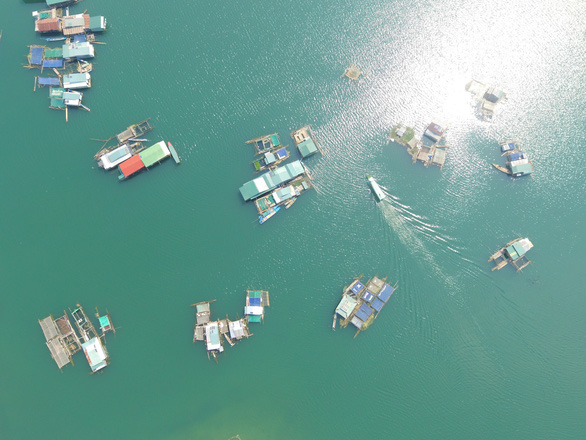 About ten years ago, when rivers in Vietnam's Mekong Delta started to run low on fish and shrimp, dozens of local households left the region for the Central Highlands in an attempt to eke out a living by fishing in reservoirs.

The fishing skills of the Mekong Delta fishermen were easily adapted to the Se San Reservoir in the Central Highlands province of Kon Tum, where 34 households, mostly from An Giang and Hau Giang Provinces in the Mekong Delta, have been coping well with the uncertainty of their new lives in the mountains.

Fishing on a mountain

Dang Van Thuoc, a 40-year-old man, was one of the first Mekong Delta fishers to leave southern Vietnam for Kon Tum.

He currently earns a living fishing in the Se San Reservoir.

Thuoc and his relatives first settled by a small reservoir in nearby Dak Lak Province but they soon realized competition for fish was fierce with other domestic migrants, particularly those from Binh Dinh and Phu Yen Provinces.

Moving to the much less populated Se San Reservoir seemed like a much better option.

“There was no one [living at Se San Reservoir] when I moved there,” Thuoc said.

“My relatives and I were the first, but more and more people have moved there over the past 12 years.”

In 2010, when Thuoc and his family first came to the reservoir, they were amazed by the age-old trees that filled the water.

Though fishing at night could be dangerous because of the trees, the difficulties were worth the bounty of fish in the water.

It was worth the move as well.

“I could only earn a good income [in the Mekong Delta] during the three-month flood season," he said.

“The rest of the year there were fewer fish but just as many fishermen. Fish farmers weren’t affected, but people like me really struggled.”

Moving to the Se San Reservoir also meant giving up life on land.

Thuoc and his family, just like dozens of others who relocated to the area from the Mekong Delta, found themselves living on four-to-five-sqaure meter rafts right on the water.

Few, if any, had permanent homes.

A new life on both water and land

Nguyen Thanh Nhan, a 41-year-old born in Tri Ton, An Giang has lived on the reservoir with his wife for the past five years.

In 2015, Kon Tum established Ia H’Drai District and created policies allowing each of the 29 households in the fishing village to receive a 400-square-meter land plot and VND50 million (US$2,147), Nha recounted.

The support was integral in helping the fishermen and their families build houses on dry ground.

Many have kept their homes on the water to support their fishing.

“If the district had not developed such policies, we would have lived uncertain lives and our kids would have not been able to go to school,” Nhan said.

The local government also helped stock the reservoir with a variety of fish breeds, including lamprey, red tail catfish, and red tilapia.

Ha Thi Diem Nhung, Nhan’s wife, now earns up to VND15 million ($644) per month during the peak tourism season, enough for the couple to cover their kids’ tuition fees, though their new work has meant no time to fish.

“Aside from raising fish and offering tourism services, dozens of households in the fishing village still make a living by fishing," Nhung said.

"Our dried anchovies and anchovy rice paper are specialties favored by tourists."

The fishermen of the Se San Reservoir head out for their fishing journey at sunset, hoping to reel in a big catch, but the dead trees that litter the waterway are a constant cause for concern.

Years ago, Nhan was able to catch more than 70 kilograms of anchovies each night, but that number has since dwindled.

Still, Nhan and fishers like him are happy to have houses and, hopefully, bright futures ahead.

Tuan added that the district’s biggest desire is to ensure schooling for the children of these fishers.

So far, their efforts have been successful and most children in the district are able to attend school.