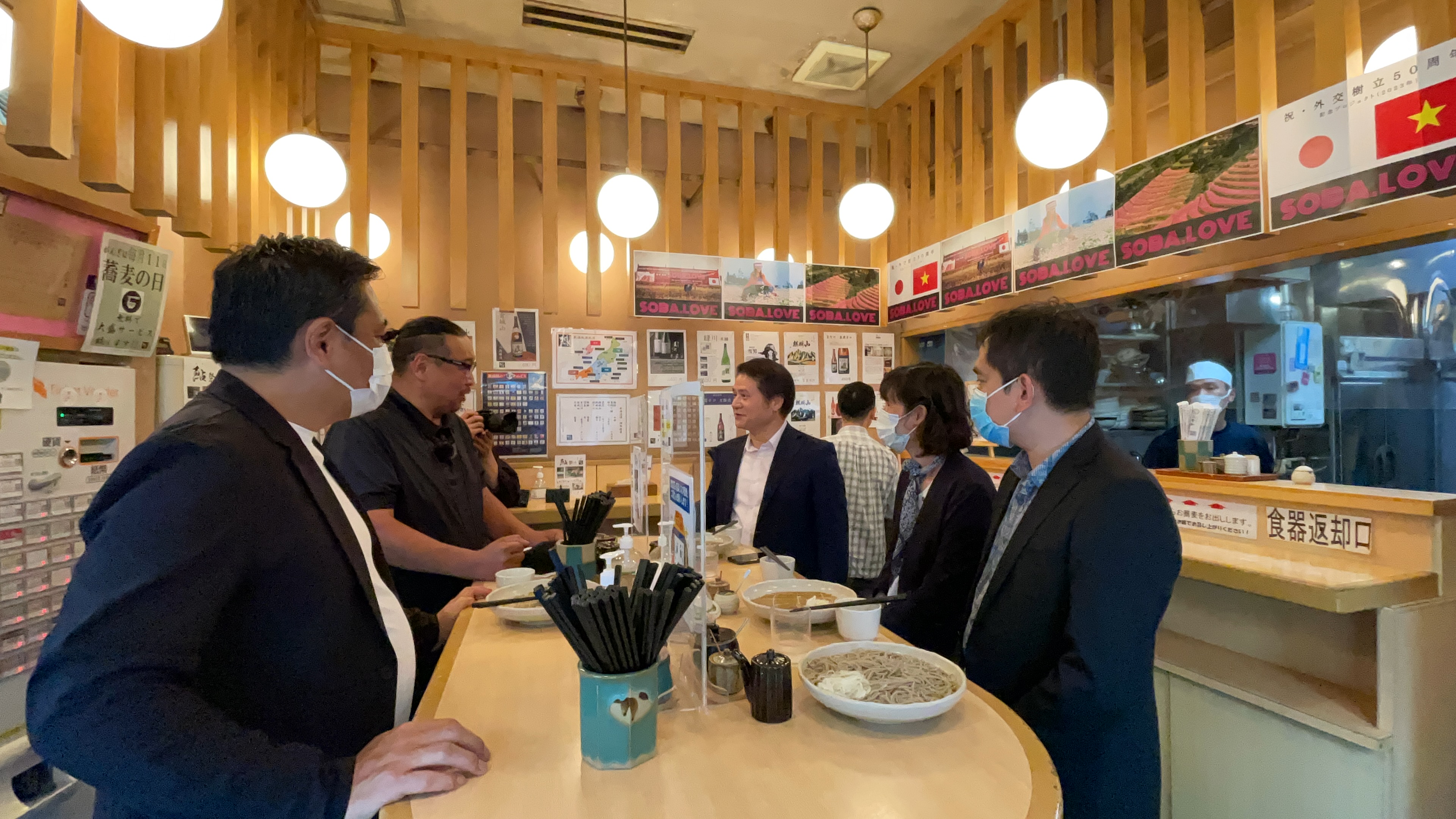 On June 24, a special event was held at four Gangi Company soba restaurants in Tokyo, Japan. Despite its limited scale, the event has symbolic meaning for farmers living in Ha Giang, a mountainous province in northern Vietnam.

At the event, all four restaurants used entirely Vietnamese soba powder to prepare the noodles, but none of the guests noticed a difference.

They still felt the familiar delicious taste of the soba bowls, with the soba sourced from the rocky highlands of Ha Giang.

The June 24 event was a significant success for the people behind the SOBA.LOVE project, which has developed a material farming area in Ha Giang.

It is also 'the first medal' for Matsuo Tomoyuki, a Japanese entrepreneur who spent eight years traveling to many mountainous provinces in northern Vietnam to find suitable terrain for buckwheat.

The event made an important milestone for buckwheat grown by the H'mong ethnic group in Dong Van District, Ha Giang.

They have another potential crop in their fields, which are known to be unsuitable for many common crops due to low rainfall and mountainous terrain.

When disadvantages are advantages

When it comes to karma, it came naturally for Matsuo because he has been 'prepared' for it for so long.

It began when he was a boy and lived with his grandmother, who knew a lot about buckwheat and soba noodles.

In his childhood, Matsuo was taught by his grandmother about the original taste of soba, the common name for Japan's traditional dish in different variations.

It is fantastic and interesting for him to 'meet again' a pure taste familiar to him during a business trip to Vietnam in 2014.

Since then, many ideas emerged that are both attractive and adventurous.

First, Matsuo traveled by motorcycle for months to many of Vietnam's northern mountainous provinces such as Cao Bang, Dien Bien, Son La, Bac Can, and Lao Cai.

After finding that Dien Bien is too far away, Lang Son has mountains with unreasonable heights, and Lao Cai is heavily modernized, the Japanese entrepreneur decided to 'land' in Dong Van, Ha Giang, a place whose weather and soil characteristics are perfect for buckwheat.

Matsuo's destiny with buckwheat blossomed in Ha Giang when he met a young farmer who is a local and knows a lot about the crop.

The man, whose name is Vang, took Matsuo to his home and introduced him to local dishes made from buckwheat by the H'mong ethnic group.

He also helped Matsuo learn where buckwheat had previously been grown in Ha Giang Province.

Despite this first happy encounter, Matsuo still had to overcome many obstacles to realize his dream of growing buckwheat.

Looking at how he rode his motorcycle over mountainous roads, one would naturally think that he could not do that without a muscular body like a sumo fighter in Japan.

From planting to harvesting a buckwheat field often takes only three months.

Yet, it took Matsuo and his staff at JVGA Company ten times that time to harvest the first buckwheat crop in Ha Giang, as several challenges had to be overcome.

By early 2022, JVGA had harvested the first crop on its 50 hectares of buckwheat in Cao Banh Village, Phuong Thien Commune, Ha Giang City.

In March, the first shipment of buckwheat powder arrived in Japan.

Besides supplying powder, the buckwheat fields attract many tourists from home and abroad in spring.

According to Matsuo, Ha Giang has some other advantages besides soil and climate characteristics.

Interestingly, this advantage comes from its own disadvantages due to natural conditions.

Since Ha Giang's terrain is full of obstacles and is difficult to access, the province has poor transportation connectivity, resulting in slower urbanization than other provinces, which naturally makes it a perfect and stable environment for growing and maintaining the quality of buckwheat, the Japanese explained.

JVGA wants to take advantage of the fields not used by local farmers after the annual harvests of corn and rice, due from September to January.

In this way, the firm aims to help the farmers increase land productivity.

JVGA employs locals as laborers with monthly salaries and provides them with fertilizers and buckwheat seeds.

The company plans to build a factory to process buckwheat powder onsite as well.

From Dong Van to Tokyo

To Hoang Tu, head of JVGA's marketing and communications department in Japan, told Tuoi Tre (Youth) newspaper that there are some Japanese companies that have taken notice of buckwheat cultivation in Ha Giang since 2000, including JVGA's two biggest partners, Gangi and Yudetaro.

Iwata Masaharu, president and CEO of Gangi, said that Vietnamese buckwheat has a natural taste and aroma.

Many of Gangi's customers gave positive feedback to the restaurant chain.

"We plan to increase the amount of Vietnamese buckwheat a little over time," Iwata said.

"We hope JVGA will boost its production so we can use 100 percent Vietnamese buckwheat in our portions."

Japan imports about 90,000 tonnes of buckwheat seeds annually, mainly from China, but also from the U.S. and Russia, Matsuo said.

The entrepreneur sets himself a goal for JVGA to supply 500 tonnes to his hometown market.

The production of JVGA's cultivation area in Ha Giang can help achieve this goal. Once Vietnamese buckwheat gains a foothold in the Japanese market, it can conquer other markets in the world.

When Tuoi Tre asked if the target of 500 tonnes as a short-term goal was realistic, Matsuo laughed and said, "No, it is our long-term goal because if you are greedy and only seek profit, you can end up without the best quality."

After eight years of finding his own way, Matsuo is confident that buckwheat grown in Ha Giang can easily integrate into the Japanese soba market and be served to diners in Tokyo.

Recently, more and more shipments of buckwheat have been exported with logos of Vietnamese flags.

With a price tag of around VND9,000 (US$0.38) per kilogram and a plan to export 600 tonnes of buckwheat this year and about 3,000 tonnes in 2024, Ha Giang will soon be covered with buckwheat flowers which are considered a potential source of tourism.

As an experienced entrepreneur in consulting, investment, and business, Matsuo knows the advantages and factors that can help a brand achieve long-lasting success.

He intends to develop an optimization of the control process for JVGA's buckwheat.

JVGA has reasons to be so confident about its chances.

The firm conducted a blind test in a soba restaurant in Tokyo. In this test, buckwheat powder from China and Vietnam was used in making soba noodles without the diners knowing which buckwheat came from which country.

The result was that all three of the restaurant's staff members said that the soba bowls made from Vietnamese buckwheat were more delicious than those made from Chinese one.

According to Matsuo, JVGA will be responsible for the 'A to Z process' regarding buckwheat, which includes three areas: (1) production, (2) trade (export/import), and (3) distribution in Japan.

The company recently won 2nd place in the New Business Proposal Event for KONAKA, a chain of fashion stores with 459 outlets throughout Japan.

Thirty-seven households in Meo Vac District are working for the SOBA.LOVE project.

With the goal of developing the cultivated area in the long term, Matsuo is willing to hire local farmers as permanent employees of JVGA, which in turn will help them lead a stable life in their familiar fields while growing buckwheat.

Previously, the district provided farmers with 50-60 kilograms of seeds and VND3 million ($128) as payment for their work.

Matsuo wants not only to build an ambitious circle of buckwheat grown in Ha Giang but also to churn out Japanese soba noodles with characteristic flavors from Vietnam.

To this end, he uses locally available ingredients such as goat meat, chicken, Meo canola, and freshwater shrimp to make bowls of Vietnamese soba noodles.

In Japan, traditional soba noodles do not contain these ingredients.

Matsuo Tomoyuki is a graduate in computer science at Sacred Heart University in the U.S.. He is the president of the Vietnam - Japan Culinary Association and the founder of the SOBA.LOVE project. He has already opened restaurants selling soba noodles in Ho Chi Minh City, Hanoi, Da Nang, and Ha Giang.