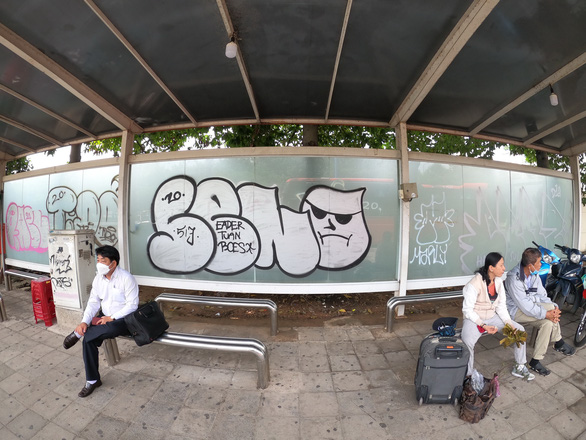 Within weeks of their purchase, the new railcars purchased for Ho Chi Minh City’s Metro Line No. 1 had already been completely blanketed in graffiti, though it is hardly surprising given just how widespread graffiti culture has become in the city, with tags covering thousands of walls, buildings, bus stops, vehicles, and even the newly opened Thu Thiem 2 Bridge.

The so-called 'graffiti artists' responsible for giving Ho Chi Minh City its unwanted fresh coat of paint include both Vietnamese and foreigners who roam the city in the early morning hours looking for a clean wall to tag.

In the wee hours of August 18, the four artists descended on Nguyen Sieu and Ton Duc Thang Streets in District 1 where they were quick to cover a rolling door with a spray-painted purple-and-yellow fire hydrant shape and a power transformer station with a ferocious pit bull image.

All four of the graffiti artists arrived on foot, explaining that it was easier to flee the scene if needed.

With their graffiti completed, the group moved on to an underpass under the Nguyen Huu Canh Bridge, where two of the young men spent 30 minutes painting a fierce-looking pit bull while the other two kept watch.

The next few hours included stops to tag walls near the Saigon Zoo and Botanical Gardens, bus stops on Nguyen Huu Canh and Le Thanh Ton Streets, and dustbins.

While tagging a bus stop on Nguyen Huu Canh Street at 4:30 am, two criminal police officers threatened to bring the group to a nearby police station, but eventually just let the group go.

The five members of the group shared that they are all residents of Thu Duc City and typically park their motorbikes near 23/9 Park in District 1 before heading out on foot to tag the city.

In their bags, the group carries spray paint for tagging walls and paint markers for signing their work.

Usually, one member of the group takes photos and records videos for social media while the others paint.

They continued spray-painting the neighborhood until about 2:00 am when a security guard asked them to leave.

The young graffiti artists Tuoi Tre reporters spoke to are proud of their work – they consider it an important part of the city’s art culture.

Many even upload newspaper articles which criticize the city’s graffiti scene to Instagram alongside captions that challenge the narrative that graffiti is vandalism.

Kant, a young graffiti artist, has gained particular social media notoriety for posting photos of his graffiti on trucks, doors, and buses.

These graffiti artists are so prolific because they can put up a tag in just a few minutes and then move onto the next one.

In just a few hours they can cover dozens of doors, walls, and windows in spray paint.

But Graffiti in Ho Chi Minh City is not limited to locals.

GPS CREW, a collective of foreign graffiti artists who go by the nicknames Sixte, Mate, and Answer, have tagged walls along the Nguyen Huu Canh overpass and doors, bridges, and electric poles on Nguyen Thi Minh Khai and Tran Hung Dao Streets in District 1.

GPS CREW is known for tagging hard-to-reach places, such as above the entrance to an underpass on Nguyen Huu Canh Street.

Regardless of whether the graffiti is done by a local or a foreigner, the city’s residents are not particularly happy with the new coat of paint that has descended on the city.

“I don’t understand their strange hobby. They seem happy to destroy other people’s property,” a local newspaper seller said.

B., a drink vendor in District 1, said she has seen many of these graffiti artists in action.

“They are always young and work in pairs to draw graffiti from midnight until dawn," B. said, adding that she has been threatened when trying to intervene.

“They never do it in the daytime because they don’t want to be seen."

Trung, the owner of a house in District 1, is also unhappy about the graffiti.

“I had to have someone repaint my front because it was vandalized, but it was covered again in graffiti the next day," he said.

“I don’t bother repainting it anymore because it just makes things easier for the vandals."

Truong, another homeowner in District 1, said his home has suffered a similar fate to Trung’s.

“This is obviously an act of vandalism and a solution is seriously needed,” he said.

Graffiti is not just limited to overpasses and homes.

The offices of several state agencies, including an outpost for the Ministry of Information and Communications and the headquarters of the municipal Department of Transportation, have also been plagued by spray-paint vandalism.

Kien said his agency has figured out several solutions, such as covering electric cabinets with nets and using stain-resistant paint, but such solutions are not cost-effective.

“We have also weighed the installment of electronic advertising boards on electric cabinets that simply isn’t feasible. We have spent quite a bit of money trying to mitigate graffiti, but that has been in vain,” Kien shared.

Young 2, a graffiti artist in Ho Chi Minh City, explained that most people who do graffiti practice on paper first in order to create their own style.

“It also requires efforts and money. There is also a lot of danger,” Young 2 said.

“It’s a risky game. If we are caught, we will get taken to the ward headquarters.

"Many people have been caught red-handed spraying paint.”

Clues about the culprits

Graffiti artists typically sign their work using nicknames so that others can recognize their 'art.'

UBIX CREW, for example, seems to have spray-painted the Thu Thiem 2 Bridge, railcars belonging to Metro Line No. 1, areas of Ton Duc Thang and Dien Bien Phu Streets in Ho Chi Minh City, and even Song Quao Lake in the south-central province of Binh Thuan.