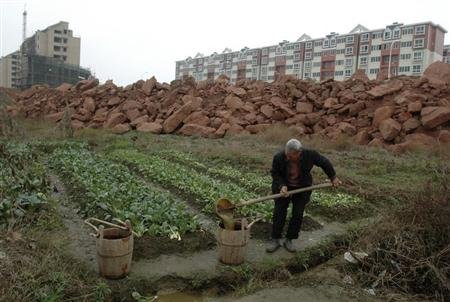 SHANGHAI – China's land ministry has issued an emergency notice calling for an end to forced, illegal land requisitions, the state-run People's Daily reported on Wednesday, stepping up efforts to defuse one of the biggest sources of public protest in China.

The Ministry of Land Resources issued the notice in reaction to what the newspaper, the Communist Party official publication, said had been a spate of violent land grabs.

It called on regional authorities to re-examine and standardise land acquisition procedures.

"Illegal acts of forcible land acquisition must be severely punished," it said.

China is rife with stories of regional governments and construction companies using strong-arm tactics to force residents to move, often with inadequate compensation, to make way for lucrative property developments.

Forced evictions and land requisitions, which are widely thought to enrich officials unfairly at the expense of residents, have sparked tens of thousands of street protests and clashes over the years.

The ministry said regions should conduct in-depth research into the problems behind current land disagreements and come up with targeted policies to handle them, ensuring that farmers are properly compensated, the paper said.

About 90,000 "mass incidents" - a euphemism for social unrest - occur each year in China, of which some two-thirds are triggered by land-related disputes.

The government has vowed repeatedly to crack down on illegal land grabs, but to little apparent effect.