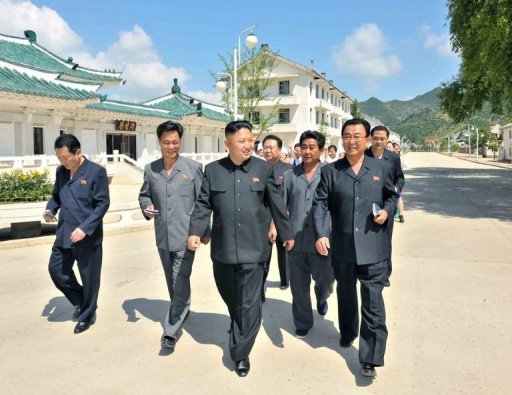 North Korea proposed high-level talks with the US on denuclearisation and easing tensions on the Korean peninsula, just days after it abruptly cancelled a rare meeting with the South.

Tension has been high on the peninsula since the North's third nuclear test in February that triggered new UN sanctions which ignited an angry response from Pyongyang, including threats of nuclear attacks on Seoul and Washington.

A rare high-level meeting between two Koreas scheduled for June 12 and 13, which would have been the first between the two sides for six years, was cancelled on Tuesday due to spats over protocol.

The latest proposal came as the North came under increasing pressure to abandon its atomic arsenal and its belligerent behaviour, not only from the US and its ally the South, but also Pyongyang's sole major ally, China.

"We propose senior-level talks between... the (North) and the US to defuse tensions on the Korean Peninsula and ensure peace and security in the region," the North's powerful National Defense Commission said in a statement carried by state media.

The North is willing to have "broad and in-depth discussions" on issues such as the building of "a world without nuclear weapons" being promoted by US President Barack Obama, it said, inviting the US to set the time and venue for the meeting.

"If the US has true intent on defusing tensions on the Korean Peninsula and ensuring peace and security in the US mainland and the region, it should not raise preconditions for dialogue and contact," it said.

Analysts said Washington is unlikely to accept the latest proposal without any concrete action from Pyongyang to move towards denuclearisation -- a pre-condition for any talks long demanded by the US.

"The US has repeatedly made it clear that it was not interested in a dialogue for the sake of dialogue," said Yang Moo-Jin, a professor at the University North Korean Studies in Seoul.

"So I'm not sure if Washington will respond to the talks offer, especially if it was made without any behind-the-curtain negotiations between Pyongyang and Washington in advance," he said.

The country said in Sunday's statement that it was committed to denuclearisation of the peninsula but defended its atomic arsenal as "self-defence" against what it called military and nuclear threats from the US.

"The legitimate status of the (North) as a nuclear weapons state will go on... until... the nuclear threats from outside are put to a final end," it said, urging the US to also scrap all sanctions against it.

Chinese leader Xi Jinping, who agreed at a summit with Obama earlier this month that the North must give up its nuclear arsenal, is also to hold talks with the South's leader Park Geun-Hye on June 27.

"The North is hard-pressed to show some kind of reconciliatory gestures to avoid being further isolated in this dynamic, especially by China," said Kim Yong-Hyun, a North Korea expert at Seoul's Dongguk University.