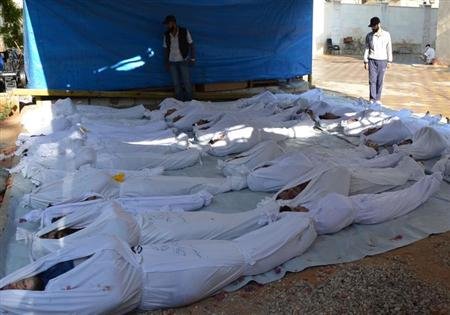 Opposition says as many as 1,300 killed in gas attack near Damascus

Syria's opposition accused President Bashar al-Assad's forces of gassing many hundreds of people - by one report as many as 1,300 - on Wednesday in what would, if confirmed, be the world's worst chemical weapons attack in decades.

Western and regional countries called for U.N. chemical weapons investigators - who arrived in Damascus just three days ago - to be urgently dispatched to the scene of one of the deadliest incidents of the two-year-old civil war.

Images, including some taken by freelance photographers and supplied to Reuters, showed scores of bodies including of small children, laid out on the floor of a clinic with no visible signs of injuries.

Reuters was not independently able to verify the cause of their death. The Syrian government denied that it had used chemical arms.

George Sabra, one of the leading opponents of Assad, said the death toll was 1,300 killed by poison gas rained down on suburbs east of Damascus.

"Today's crimes are ... not the first time the regime has used chemical weapons. But they constitute a turning point in the regime's operations," he told a news conference in Istanbul. "This time it was for annihilation rather than terror."

An opposition monitoring group, citing figures compiled from medical clinics in the Damascus suburbs, put the death toll at 494 - 90 percent of them killed by gas, the rest by bombing and conventional arms. The rebel Syrian National Coalition said 650 people had been killed.

If the cause of death and the scale of the killing were confirmed, it would be the worst known use of chemical weapons since Iraqi leader Saddam Hussein gassed thousands of Kurds in the town of Halabja in 1988.

The Damascus Media Office monitoring centre said 150 bodies were counted in Hammouriya, 100 in Kfar Batna, 67 in Saqba, 61 in Douma, 76 in Mouadamiya and 40 in Irbib, all suburbs of Damascus.

"Many of the casualties are women and children. They arrived with their pupils constricted, cold limbs and foam in their mouths. The doctors say these are typical symptoms of nerve gas victims," the nurse said. Exposure to sarin gas causes pupils in the eyes to shrink to pinpoint sizes and foaming at the lips.

The U.N. team is in Syria investigating allegations that both rebels and army forces used chemical weapons in the past, one of the main disputes in international diplomacy over Syria.

The Swedish scientist leading the team, Ake Sellstrom, said the reports should be looked into, but doing so would require a request from a U.N. member state.

France said the mission must be sent to the site to "investigate immediately". Turkey and Saudi Arabia made similar calls. Britain said it was deeply concerned and would raise the issue at the U.N. Security Council, adding the attacks would be "a shocking escalation" if confirmed.

Extensive amateur video and photographs appeared on the Internet showing countless bodies, with victims choking, some of them foaming at the mouth, and no sign of outward injury.

A video purportedly shot in the Kafr Batna neighbourhood showed a room filled with more than 90 bodies, many of them children and a few women and elderly men. Most of the bodies appeared ashen or pale but with no visible injuries. About a dozen were wrapped in blankets.

Other footage showed doctors treating people in makeshift clinics. One video showed the bodies of a dozen people lying on the floor of a clinic, with no visible wounds. The narrator in the video said they were all members of a single family. In a corridor outside lay another five bodies.

The head of the opposition Syrian National Coalition said Assad's forces had carried out a massacre: "This is a chance for the (U.N. inspectors) to see with their own eyes this massacre and know that this regime is a criminal one," Ahmed Jarba said.

Syria is one of just a handful of countries that are not parties to the international treaty that bans chemical weapons, and Western nations believe it has caches of undeclared mustard gas, sarin and VX nerve agents.

Assad's officials have said they would never use poison gas - if they had it - against Syrians. The United States and European allies believe Assad's forces used small amounts of sarin gas in attacks in the past, which Washington called a "red line" that justified international military aid for the rebels.

Assad's government has responded in the past by accusing the rebels of using chemical weapons, which they deny. Western countries say they do not believe the rebels have access to poison gas. Assad's main global ally Moscow says accusations on both sides must be investigated.

Khaled Omar of the opposition Local Council in Ain Tarma said he saw at least 80 bodies at the Hajjah Hospital in Ain Tarma and at a makeshift clinic at Tatbiqiya School in the nearby district of Saqba.

An activist working with Ahrar al-Sham rebel unit in the Erbin district east of the capital who used the name Abu Nidal said many of those who died were rescuers who were overcome with poison when they arrived at the scene.

"We believe there was a group of initial responders who died or were wounded, because when we went in later, we saw men collapsed on staircases or inside doorways and it looks like they were trying to go in to help the wounded and then were hurt themselves," he told Reuters by Skype.

"At first none of us knew there were chemical agents because it seemed like just another night of air strikes, and no one was anticipating chemical weapons use, especially with U.N. monitors in town."

The timing of the allegations - just three days after the U.N. experts checked in to a Damascus hotel a few kilometres to the east at the start of their mission - was surprising.

"It would be very peculiar if it was the government to do this at the exact moment the international inspectors come into the country," said Rolf Ekeus, a retired Swedish diplomat who headed a team of UN weapons inspectors in Iraq in the 1990s.

"At the least, it wouldn't be very clever."