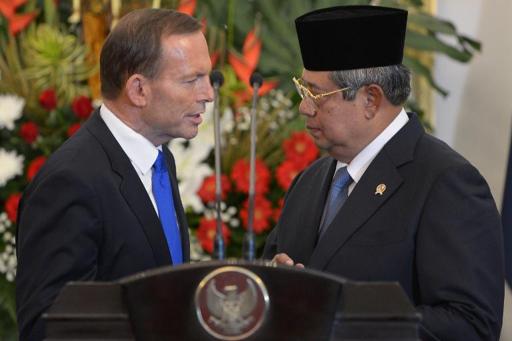 Susilo Bambang Yudhoyono also announced that cooperation would be temporarily halted in a number of other areas, including military exercises and intelligence exchanges.

But the most important area for the new Australian government of Tony Abbott will be people-smuggling, as it tries to stem the flow of asylum-seekers arriving by boat from Indonesia.

It was the latest angry outburst from Indonesia over reports, based on documents leaked by US intelligence fugitive Edward Snowden, that Australian spies tried to listen to the phone calls of the president, his wife and ministers in 2009.

Indonesia recalled its ambassador from Canberra earlier this week over the scandal and Yudhoyono has publicly lambasted Abbott on Twitter for what he called a lack of remorse.

Announcing the suspension of cooperation Wednesday after a crisis meeting at the presidential palace, an angry Yudhoyono said: "For me personally, and for Indonesia, the wiretapping by Australia... is difficult to comprehend.

"This is not the Cold War era."

He said that "coordinated military cooperation", which includes joint work to curb people-smuggling, would be halted "until everything is clear".

Currently Australia and Indonesia carry out coordinated patrols at sea and their search and rescue agencies are regularly in touch, particularly when asylum-seeker boats get into trouble.

"Everything has been suspended because (the Australians) prefer to gather information in unlawful ways," he told AFP.

It is a heavy blow for Abbott, who won power in September with a series of tough policies to stem the flow of asylum-seeker boats, including turning vessels back to Indonesia when it is safe to do so.

Thousands of asylum-seekers, mostly from Iran and Afghanistan, board rickety wooden boats in Indonesia every year to make the sea crossing to Australia, normally paying people-smugglers large sums of money.

Hundreds have died in recent years while trying to make the perilous journey.

Yudhoyono also said he planned to send a letter to Abbott to personally ask him for an explanation.

"I am still hoping, and I am sure Australia is still hoping... that we can still work together after this problem is overcome," he added.

Abbott said he would respond to the letter "swiftly, fully and courteously" and expressed "deep and sincere regret about the embarrassment" caused by the spying claims.

However he once again refused to apologise.

Jakarta has repeatedly voiced anger at Australia's failure either to say sorry or offer what it sees as a clear explanation for the spying.

Earlier Wednesday Abbott told parliament: "I do note there have been allegations and even admissions in the past on this subject, people didn't overreact then and I certainly don't propose to overreact now."

He appeared to be referring to an apparent admission by Jakarta's former intelligence chief to similar spying operations by Indonesia in the past, as reported in the Australian media Wednesday.

The Australian newspaper and the tabloid Sydney Daily Telegraph both cited comments from a 2004 television interview with Indonesia's retiring intelligence chief Abdullah Mahmud Hendropriyono, in which he said all governments tapped each other's communications.

Greg Fealy, an Indonesia expert at the Australian National University, said relations between Canberra and Jakarta had not been so bad since the Australian military went into East Timor as Indonesia pulled troops from its former territory in the late 1990s.

"You'd have to go back 15 years to find something as serious as this," he told AFP.

The leaked documents from Snowden, reported by the ABC and the Guardian newspaper, showed that Australia's electronic intelligence agency tracked Yudhoyono's activity on his mobile phone for 15 days in August 2009, when Labor's Kevin Rudd was prime minister.

At least one phone call was reportedly intercepted.