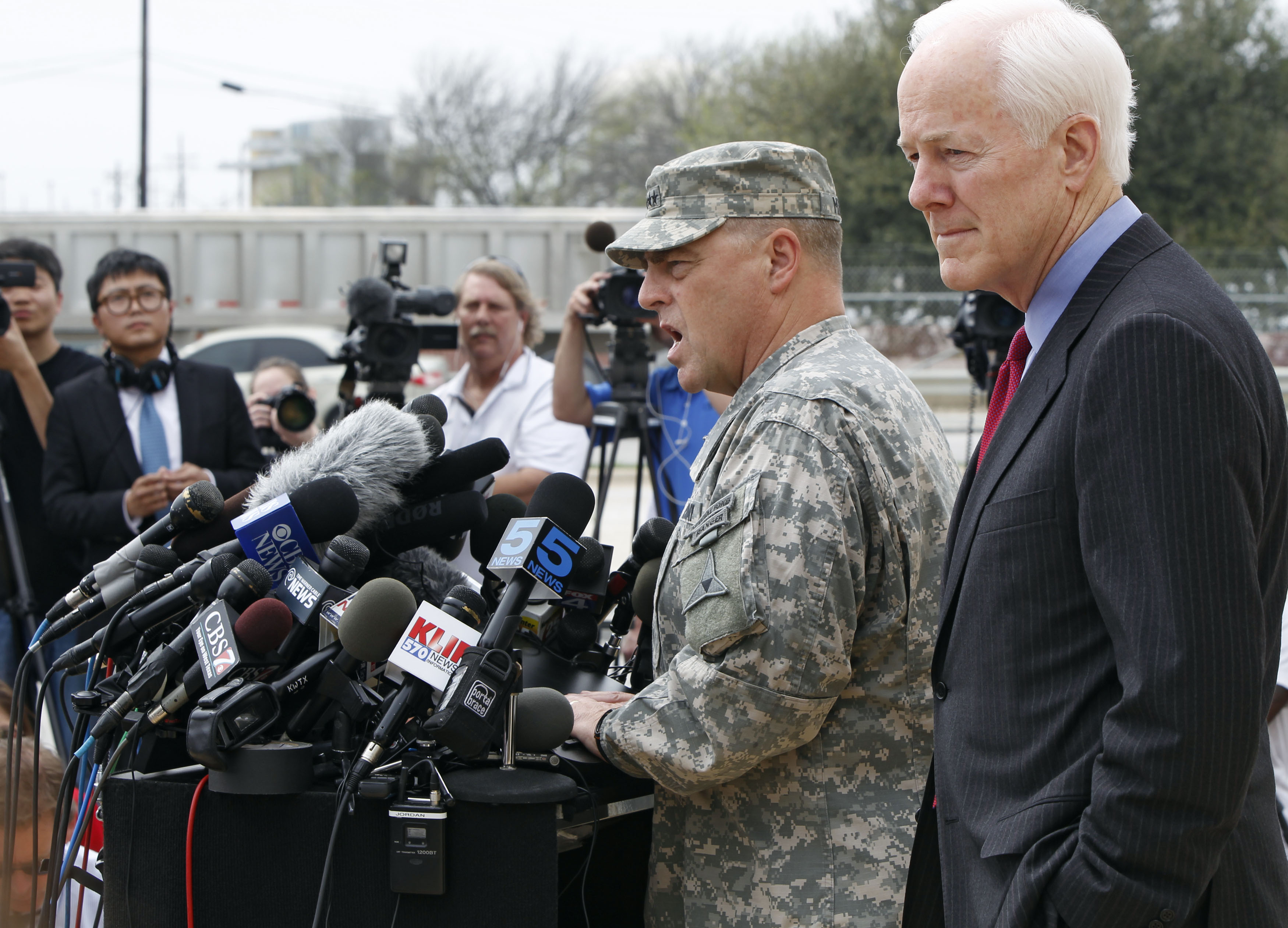 Signs of argument before US base shooting: commander

A troubled US soldier who shot dead three people and wounded 16 more at Fort Hood may have argued with one or more colleagues before his rampage, his base commander said Thursday.

Lieutenant General Mark Milley told reporters that investigators were combing through the records of the gunman, Army specialist Ivan Lopez, to determine his mental state before Wednesday's incident, which ended when he fatally shot himself.

"We're trying to figure out what the trigger event was," Milley told a press conference at the sprawling Texas base, which is home to 70,000 people including more than 40,000 military personnel.

"There may have been a verbal altercation" with one or more soldiers immediately before the 34-year-old opened fire, he said.

"We do not have that definitively at this point but we have strong indications of that."

The shooting revived memories of an Al-Qaeda inspired gun attack at the base in 2009 by Major Nidal Hasan, who is awaiting execution for killing 13 people and wounding more than 30 others.

Military officials however have said Lopez -- who served in Iraq in 2011 but did not see combat -- was simply thought to have been a troubled individual.

"We have very strong evidence that he has a medical history that indicates an unstable psychiatric or psychological condition," Milley said.

"We believe that to be the fundamental underlying causal factor."

The commanding general said investigators were looking at "everything from finance to medical, personal relationships, marital issues, family health issues" to figure out why Lopez opened fire.

Despite the indications of an argument preceding the shooting, Milley said it did not seem that the gunman had targeted "any specific people."

Lopez was being evaluated for possible Post-Traumatic Stress Disorder, but his superiors said they had seen no sign he posed any danger.

"At this moment, we have no indication... there were any signs of likely violence either to himself or to others," Army Secretary John McHugh told the Senate Armed Services Committee.

"His records show no wounds, no direct involvement in combat," he said, adding there was nothing to lead Army investigators to believe he had suffered a battle-related traumatic brain injury.

McHugh added that the soldier, who was attached to a logistics regiment, "had a clean record" in terms of behavioral and disciplinary matters.

Questions on base security

The incident raises fresh questions about security at US bases. As well as the two deadly shootings at Fort Hood, there was another last year at the Washington Navy Yard that left 12 dead.

Also at issue is the mental health of America's soldiers, many of whom have served repeated dangerous deployments in Afghanistan and Iraq.

Pentagon officials said Lopez worked as a truck driver in Iraq in late 2011 as the US mission was coming to an end.

"He was undergoing a variety of treatments and diagnosis for mental health conditions, ranging from depression to anxiety to some sleep disturbance," said McHugh.

"He was prescribed some drugs to address those, including Ambien," he said, referring to a common sedative, and added that Lopez had seen a psychiatrist last month.

Military doctors had decided "to just continue to monitor and to treat him as deemed appropriate," McHugh said.

Military officials said Lopez had served in the National Guard in the US territory of Puerto Rico, which included a stint as a peacekeeper, and enlisted full-time in the army in 2010 as an infantryman.

"This was an experienced soldier," Army Chief of Staff Ray Odierno said at the hearing.

Officials said the shooting exposed the challenge of maintaining security on US military bases.

Defense Secretary Chuck Hagel acknowledged security gaps but appealed for patience to allow investigators to "do their work."

The gun used by Lopez -- a .45-caliber semi-automatic pistol -- was not declared on the base.

"It was not registered and it was under our rules being utilized illegally, without proper clearance or foreknowledge by the commander," McHugh said.

But Milley rejected the idea that all base residents could be searched on a daily basis, calling it "unrealistic."