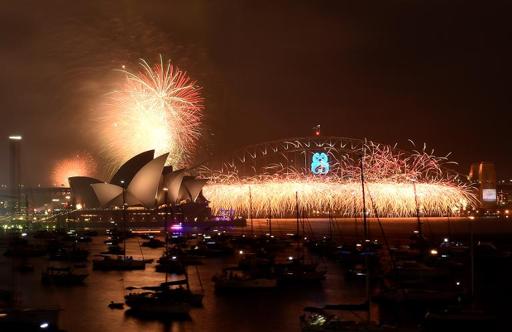 Australia's biggest city was Wednesday preparing to lead the world in welcoming the New Year with spectacular fireworks over Sydney Harbour, defying terrorist fears days after a deadly siege.

From Hong Kong to London and New York to Rio, millions around the world will celebrate when the clock ticks past midnight, ringing in 2015 with massive fireworks displays, concerts and light shows.

In Sydney, rocked by deadly drama just before Christmas when an Iranian-born gunman with a history of violence and extremism took 17 hostages in the city's financial hub, tonnes of fireworks will explode over the harbour. Up to 1.6 million people are expected to attend.

Lord Mayor Clover Moore said the two hostages who died -- cafe manager Tori Johnson and barrister Katrina Dawson -- would be remembered with floral tributes on the pylons of the Harbour Bridge.

"We are celebrating that we are a multicultural, harmonious community but we will be thinking about what happened," she said.

In the aftermath of the siege, Prime Minister Tony Abbott said security agencies had picked up a heightened level of "terrorist chatter" and warned that "the terror threat remains high and... at this level, an attack is likely".

But Moore played down fears of another such incident Wednesday, telling AFP: "We are very confident that it will be a safe event."

The first of three fireworks displays began at 9:00 pm (1000 GMT) and saw brilliant bursts of colour over the Opera House and Harbour Bridge, as revellers readied for more at 10.40pm before the midnight finale.

Across Asia, millions will be partying with Hong Kong's dazzling skyline along Victoria Harbour set to light up during an eight-minute pyrotechnic display.

In China, Beijing's bid to stage the 2022 Winter Olympics was to be the theme of celebrations, with concert pianist Lang Lang to be the star performer at an extravaganza at Olympic Park.

The Chinese capital has held New Year countdowns at the historic Temple of Heaven since 2011, but has moved the event to the site of the 2008 summer games to raise the profile of its winter Olympics bid.

In Taiwan the landmark skyscraper Taipei 101 will be at the centre of celebrations, with performances by pop singers and a firework display at midnight expected to attract hundreds of thousands.

And in Japan, the Meiji Jingu shrine in Tokyo brought out stocks of lucky charms and set up large offertory boxes as it prepared to welcome a huge wave of worshippers overnight.

The huge shrine expects three million visitors in the first three days of the new year.

In Malaysia, a sombre mood prevails across the country after the crash of AirAsia Flight QZ8501 carrying 162 people in Indonesia and flooding in the nation's northeast which has displaced almost 250,000 people.

Year-end countdown celebrations have been cancelled, with many companies instead launching fundraising campaigns for flood victims.

In Afghanistan, the last French troops in the country held a ceremony in Kabul to mark the end of their deployment after NATO combat operations closed down as a new "train and support" mission takes over.

The end of another era will be remembered in Berlin with "Baywatch" star David Hasselhoff joining a huge open air concert in front of the Brandenburg Gate, where he famously sang for freedom after the Berlin Wall fell 25 years ago.

In Paris, the Champs-Elysees will be reserved for pedestrians to let them watch a visual spectacle projected onto the Arc de Triomphe 15 minutes before the start of the new year.

The ticking of the clock past midnight will be significant for Lithuania as it adopts the euro. Another small Baltic state, Latvia, takes over the rotating presidency of the European Union, putting it on the front line of negotiations with neighbouring Russia over the crisis in Ukraine.

In Spain, millions of revellers will descend on Madrid's Puerta del Sol to eat the traditional 12 grapes for each stroke of midnight while in Barcelona a massive fireworks display will be held.

London stages New Year's Eve fireworks along the Thames and Edinburgh will be holding its traditional Hogmanay street party along the Royal Mile with tens of thousands expected.

Marking 2015 on Copacabana beach in Rio de Janeiro, more than two million people are expected to attend a huge fireworks show that will open celebrations marking 450 years since the founding of the city.

And in New York about one million revellers are expected to descend on Times Square to watch the New Year's Eve Ball Drop.