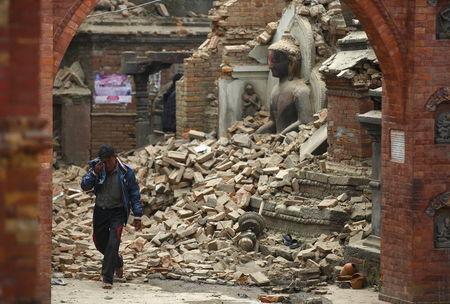 NEW DELHI/MUMBAI - A strong earthquake aftershock struck India and Nepal on Sunday, shaking buildings in New Delhi and triggering an avalanche in the Himalayas.

The United States Geological Survey said the tremor was 6.7 magnitude, less than the 7.9 quake that struck the region on Saturday killing at least 1,900 people.

"Another one, we have an aftershock right now, oh shit," Indian mountaineer Arjun Vajpai told Reuters by telephone from advanced base camp on Mount Makalu, 20 km (12 miles) from Everest.

Screams and the sound of an avalanche could be heard over the phone line Vajpai was speaking on. At Everest base camp, Romanian climber Alex Gavan tweeted that the aftershock had set off three avalanches.