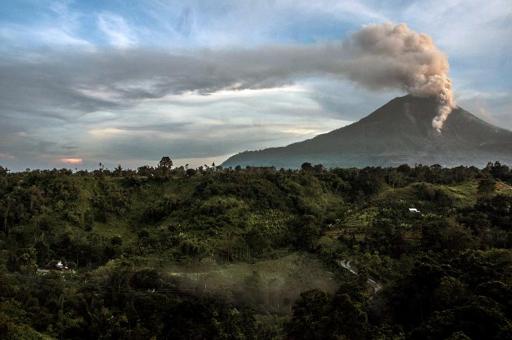 Over 1,200 evacuated in Indonesia volcano alert

More than 1,200 Indonesian villagers were Monday evacuated from their homes close to a rumbling volcano on Sumatra island, an official said.

Authorities raised the alert status of Mount Sinabung -- a highly active volcano -- at the start of this month after detecting a sharp increase in activity.

The volcano erupted at the weekend, sending trails of hot ash tumbling down the mountain. No injuries were reported.

Monday's evacuations take to almost 4,000 the number of villagers ordered from their homes this month.

"Two villages with 1,274 people were evacuated today to safer locations around 10 kilometres (six miles) away," local military commander Asep Sukarna told AFP, adding the settlements were south of the volcano.

"We plan to evacuate five to six more villages in the coming days, that's around 2,500 residents."

Sinabung rumbled back to life in 2013 after a period of inactivity, since when around 10,000 people have had to evacuate their homes.

While some were able to return once volcanic activity died down, others have been forced to remain in shelters.

A massive eruption in February 2014 killed at least 16 people and sent thousands more fleeing for safety.

Sinabung is one of 129 active volcanoes in Indonesia, which sits on the Pacific Ring of Fire, a belt of seismic activity running around the basin of the Pacific Ocean.