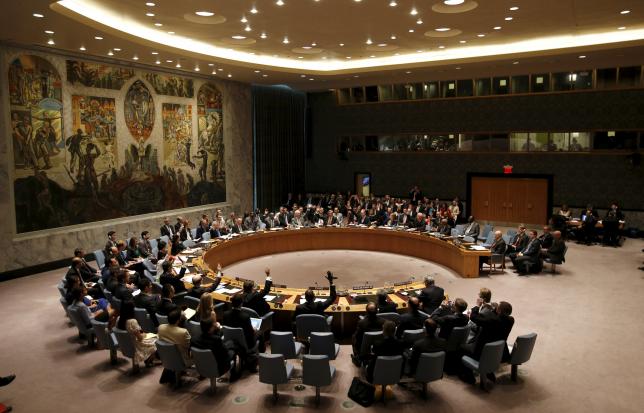 The United Nations Security Council on Monday endorsed a deal to curb Iran's nuclear program in return for sanctions relief, but it will be able to re-impose U.N. penalties during the next decade if Tehran breaches the historic agreement.

The 15-member body unanimously adopted a resolution that was negotiated as part of the agreement reached in Vienna last week between Iran and the world's major powers.

In return for lifting U.S., EU and U.N. sanctions, Iran will be subjected to long-term curbs on a nuclear program that the West suspected was aimed at creating an atomic bomb, but which Tehran says is peaceful.

Passage of the resolution triggers a complex set of coordinated steps agreed by Iran during nearly two years of talks with the United States, Russia, China, Britain, France, Germany and the European Union.

It says that no sanctions relief will be implemented until the International Atomic Energy Agency submits a report to the Security Council verifying that Iran has taken certain nuclear-related measures outlined in the agreement.

Under the deal, the major powers don't need to take any further action for 90 days. Then they are required to begin preparations so they are able to lift sanctions as soon as the IAEA verification report is submitted.

The European Union approved the Iran nuclear deal with world powers on Monday. U.S. President Barack Obama's administration has sent the nuclear agreement to Congress, which has the next 60 days to review it.

Once sanctions relief can be implemented, seven previous U.N. resolutions will be terminated and the measures contained in the resolution adopted on Monday will come into effect.

The resolution allows for supply of ballistic missile technology and heavy weapons, such as tanks and attack helicopters, to Iran with Security Council approval, but the United States has pledged to veto any such requests.

The resolution places restrictions on the transfer to Iran of nuclear technology for peaceful purposes for a decade.

It allows all U.N. sanctions to be re-imposed if Iran breaches the deal in the next 10 years. If the Security Council receives a complaint of a breach it would then need to vote within 30 days on a resolution to extend sanctions relief.

If the council fails to vote on a resolution, the sanctions would be automatically re-imposed. This procedure prevents any of the veto powers who negotiated the accord, such as Russia and China, from blocking any snap-back of Iran sanctions.All the provisions and measures of the U.N. resolution would terminate in a decade if the nuclear deal is adhered to.

However, the six world powers and the EU wrote to U.N. Secretary-General Ban Ki-moon last week to inform him that after 10 years they plan to seek a five-year extension of the mechanism allowing sanctions to be re-imposed.