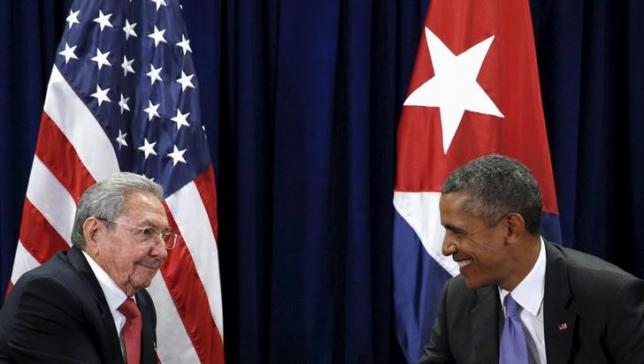 Obama preparing to visit Cuba as soon as March: source

WASHINGTON, Feb 17 - U.S. President Barack Obama is preparing to visit Cuba as soon as March, a person briefed on the matter said on Wednesday, a major step in the thaw between former Cold War foes.

Obama said in December that he would consider visiting Cuba as part of an opening to Havana that saw the two countries restore diplomatic ties and take steps toward expanded commercial relations.

A U.S. official, asked about the prospects for a March visit by Obama, declined to discuss the timing for such a trip.

"The president has said he would like to go if the conditions are right," the official said.

In December 2014, Obama and Cuban President Raul Castro shocked the world by announcing the former adversaries would normalize relations after a 54-year break.

Obama said in a December interview with Yahoo News that he hoped to visit Cuba in 2016 but only if enough progress had been made in bilateral relations.

A Cuban foreign ministry official said in reaction to the December interview that Obama was welcome to visit Cuba but not meddle in the country's internal affairs.

Washington and Havana restored diplomatic ties in July, but commerce remains limited by the U.S. trade embargo, which includes a ban on American tourism to the island.

The Republican majority in Congress has defied Obama's call to rescind the five-decade-old embargo, so he has used his executive authority to relax some trade and travel restrictions.

On Tuesday, American and Cuban officials signed an arrangement to restore scheduled air service between the two countries after half a century.

Republican presidential candidate Marco Rubio, a Florida senator whose parents emigrated from Cuba, asked at a CNN town hall event in South Carolina whether he would visit Cuba, replied: "Not if it's not a free Cuba."

The last sitting U.S. president to visit Cuba was Calvin Coolidge in 1928.