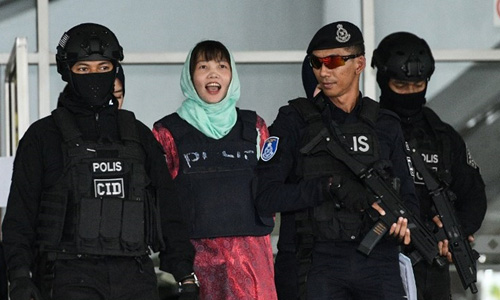 Doan Thi Huong, a Vietnamese woman accused of killing North Korean man Kim Jong Nam in 2017, has been sentenced to three years and four months behind bars after she accepted a lesser charge at a Malaysia court on Monday.

The new charge of “voluntarily causing hurt by dangerous weapons or means” carries a maximum sentence of ten years.

The judge of the Shah Alam court awarded her a remission of one-third of the original sentence and spared her from caning, saying it was aimed at “striking a balance between the interests of the public and the interests of the accused," Qatari broadcaster Al Jazeera reported the same day.

Her lawyers said she was expected to be released in the first week of May.

"I'm very happy," the handcuffed Huong told journalists from the dock while also thanking her cheering supporters, as well as the Vietnamese and Malaysian governments.

“It is a fair sentence for me,” she said.

However, Vietnamese Ambassador to Malaysia Le Quy Quynh said after the ruling he was “unhappy” with the decision not to immediately release Huong.

The Vietnamese ambassador spoke before the Malaysian court that he was grateful Huong was set for an early release, but stressed that the woman was as much a victim as Indonesia’s Siti Aisyah, a Tuoi Tre (Youth) newspaper journalist reported from the court.

Huong’s father Doan Van Thanh happily shook hands with reporters as he left the courtroom on Monday, saying he was happy with the result.

“I will throw a party when she comes back [to Vietnam],” Thanh said.

Huong, 30, has been on trial since 2017 for the murder of Kim Jong Nam at Kuala Lumpur airport in February of the same year with a toxic nerve agent.

Today’s trial came after authorities last month rejected her initial request for her murder charge to be dropped entirely – a shock decision after the attorney-general agreed to withdraw the charge against her Indonesian co-defendant, Siti Aisyah, and she walked free.

Lawyers for the women have said that they were pawns in a political assassination with clear links to the North Korean Embassy in Kuala Lumpur, and that the prosecution failed to show the women had any intention to kill.

Intent to kill is crucial to a murder charge under Malaysian law, according to AP News.

Huong was the one who applied a cloth laced with the nerve agent on Kim Jong Nam’s face, according to CCTV of the murder acquired by investigators.

Both women claimed they had been led by North Korean men to believe it was a prank meant for a television show.

“She is neither a criminal nor has the propensity to commit a crime,” Huong’s lawyer Hisyam Teh Poh Teik said.

They “exploited her weakness and manipulated her to carry out their evil designs under the camouflage of funny videos and pranks,” he said.