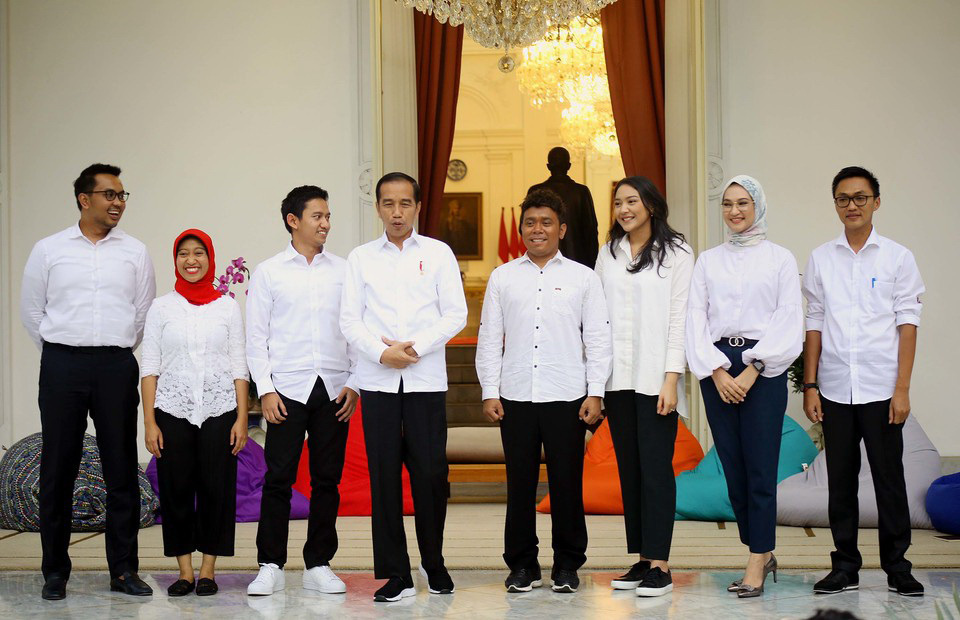 Editor’s note: Arif Nurul Imam, an Indonesian political analyst and director of IndoStrategy Research and Consulting, wrote this piece exclusively for Tuoi Tre News after learning that Indonesian President Joko Widodo had added seven "millennials" to his inner circle of consultants to assist him in his second presidential term. Millennials, also known as Generation Y (or simply Gen Y), is a term popularly referring to people born between the early 1980s to the mid-1990s and early 2000s.

President Joko Widodo (Jokowi) has just announced his special staff members, who are mostly millennials, to assist him in the 2019-2024 period. Among them, seven people come from the millennial age group who generally are entrepreneurs, sociopreneurs, and edupreneurs — business activities combined with social development, education, philanthropy, and the economy of young people.

This formation certainly makes a public surprise so it reaps the pros and cons. Moreover, the addition of special presidential staff is also blamed by some of the public as a paradoxical step. This is because President Jokowi also said that he would streamline the bureaucracy, but at the same time also increase the portion of the president's special staff.

Their ages range between 23 and 36 years, with the youngest being Putri born in 1996 - who is also the daughter of media entrepreneur Chairil Tanjung.

Those chosen are not only expected to assist in ceremonial and monotonous activities but are also expected to provide input in the form of breakthroughs and innovations in running the wheels of President Jokowi's government.

The involvement of millennial groups is expected to give a new color, while simultaneously being able to answer the challenges of an increasingly advanced and sophisticated era.

The term millennial generation comes from millennials, coined by two American historians and writers William Strauss and Neil Howe in several of their books. Experts and researchers usually use the early 1980s as the beginning of the birth of this group and the mid-1990s to the early 2000s as the end of birth.

Among other characteristics, this generation is easy to get bored, in favor of a flexible work schedule, critical of social phenomena, good at multi-tasking, and enjoy being instantaneous.

Jokowi's choice of millennials is certainly based on various interests. Not only is it an answer to the ideal demands to answer the challenges of the all-digital era, but it is also a form of political accommodation.

Millennials need space, but achievement alone is certainly not enough for consideration to be invited to join President Jokowi's circle of power.

Millennials joining in the circle of power certainly has several advantages.

First, they help the Jokowi administration understand millennial tastes and trends. As the public knows, the millennial generation has a special character that is different from previous generations. Of course, having millennials working by the president's side will help his performance in reading and formulating policies according to the challenges of the times.

Second, millennials dare to take a breakthrough and adapt quickly. The hallmark of this generation is the courage to take a breakthrough so that various innovations can emerge when they serve as ministers, especially in the midst of the current adaptation and anticipation of Industry 4.0, which ushered in an era that changed the landscape of the business world and patterns of consumption based on digital technology.

Third, millennials joining President Jokiwi's inner circle makes sense politically as a representation. Because the number of millennial voters is quite large, it also determines the outcome of elections. In the 2019 elections including the presidential election, millennial voters became one of the determinants of victory because they had a significant number. That is, the involvement and influence of this group have an important role, so it is very appropriate that they are accommodated in the palace circle.

The filling up of positions in Jokowi's second term is inseparable from the political sense of accommodation for power-sharing, including the special staff position of the millennial president. The involvement of millennials in Jokowi's power circle is almost certainly not just because of their achievements. There are political factors that also determine why they are involved in power circles.

Even though we have hope in millennials in Jokowi's circle, we understand that oligarchs are still strong in various policies. The power of the oligarchy in the palace circle is what might become a big obstacle so that various breakthroughs and innovations will be mental or useless.

Instead, this millennial special staff can provide input to Jokowi. Their whispers will only be hindered by political elites or older people in the circle near Jokowi. This is because they do not have the political power and bargaining power to push for innovations and proposed breakthroughs.

From the positive side, the involvement of millennials may provide fresh blood so that the government has a breakthrough and innovation to help it move quickly, have competitiveness, and move forward. But factually, millennial involvement in Jokowi's circle is no more than to divide power and preserve the oligarchy. This is because empirically there is a background of the son of a giant businessman and a former success team on the special staff.