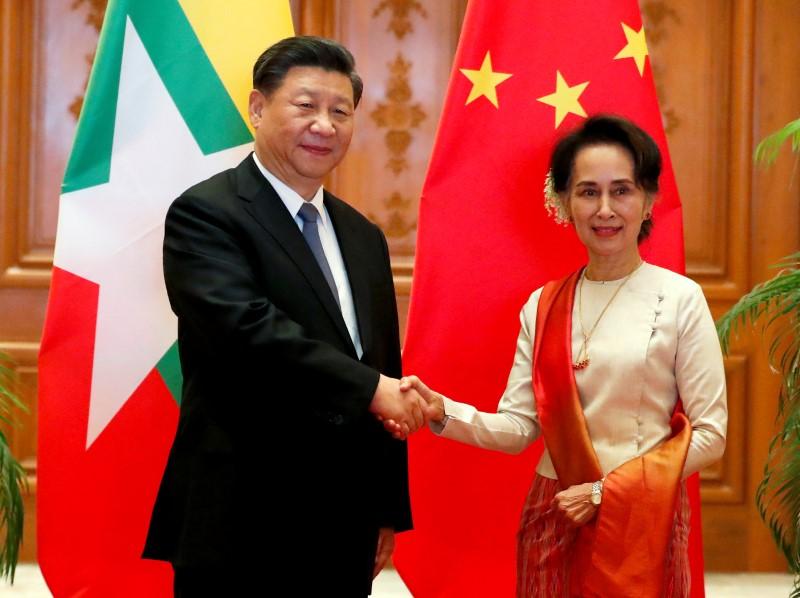 China and Myanmar inked dozens of deals on Saturday to speed up infrastructure projects in the Southeast Asian nation, as Beijing seeks to cement its hold over a neighbor increasingly isolated by the West.

But no major new projects were agreed during the two-day visit by President Xi Jinping, the first of any Chinese leader in 19 years. Analysts said Myanmar was generally cautious of investments by Beijing and was also being careful ahead of elections later this year.

They agreed to hasten implementation of the China Myanmar Economic Corridor, a giant infrastructure scheme worth billions of dollars, with agreements on railways linking southwestern China to the Indian Ocean, a deep sea-port in conflict-riven Rakhine state, a special economic zone on the border, and a new city project in the commercial capital of Yangon.

They did not address a controversial $3.6 billion Beijing-backed mega dam, where work has been stalled since 2011, reflecting the contentiousness of Chinese investment in Myanmar, where many are uncomfortable with the sway Beijing has over its smaller neighbor.

“While a large number of different agreements have been signed, there is no Big Bang here,” said Richard Horsey, a Yangon-based analyst with the International Crisis Group.

“The overall impression is that Myanmar is being cautious about Chinese investment, especially ahead of elections planned later in the year, he said.

“China will be hoping that this is an incremental step toward realizing its mega-infrastructure goals, and that further progress can be locked in over the coming months,” he said.

At a welcoming ceremony on Friday, Xi hailed a “new era” of relations between the countries.

“We are drawing a future roadmap that will bring to life bilateral relations based on brotherly and sisterly closeness in order to overcome hardships together and provide assistance to each other,” Xi said. He was scheduled to leave later on Saturday.

Suu Kyi called China “a great country playing an important role in the international affairs and the world economy” but urged for economic projects that avoid environmental degradation and benefit locals.

Sai Kyaw Nyunt, joint-secretary of the Shan Nationalities League for Democracy, one of the ethnic politicians invited to meet Xi, said it was only a handshake.

“Our country is very small and powerless,” he said, “So they treat us that way.”

The two countries have historically had a fraught relationship, but have moved closer since 2017, when Myanmar was internationally condemned for its treatment of minority Rohingya Muslims in Rakhine state.

More than 730,000 Rohingya were forced to flee western Myanmar after a military crackdown that the United Nations has said was executed with “genocidal intent”. China has defended the country on the global stage and is viewed as the biggest obstacle to a prosecution of its leaders at an international war crimes tribunal.

An article in Chinese state media ahead of the state visit said Myanmar had been “derailed” by its engagement with the West and only China was willing to “pull Myanmar from the sludge”.

“But after some turbulence, Myanmar realized there were double standards in the approach Western countries had taken on human rights issues and began to turn to China for diplomatic and economic help,” the article in the Global Times said.