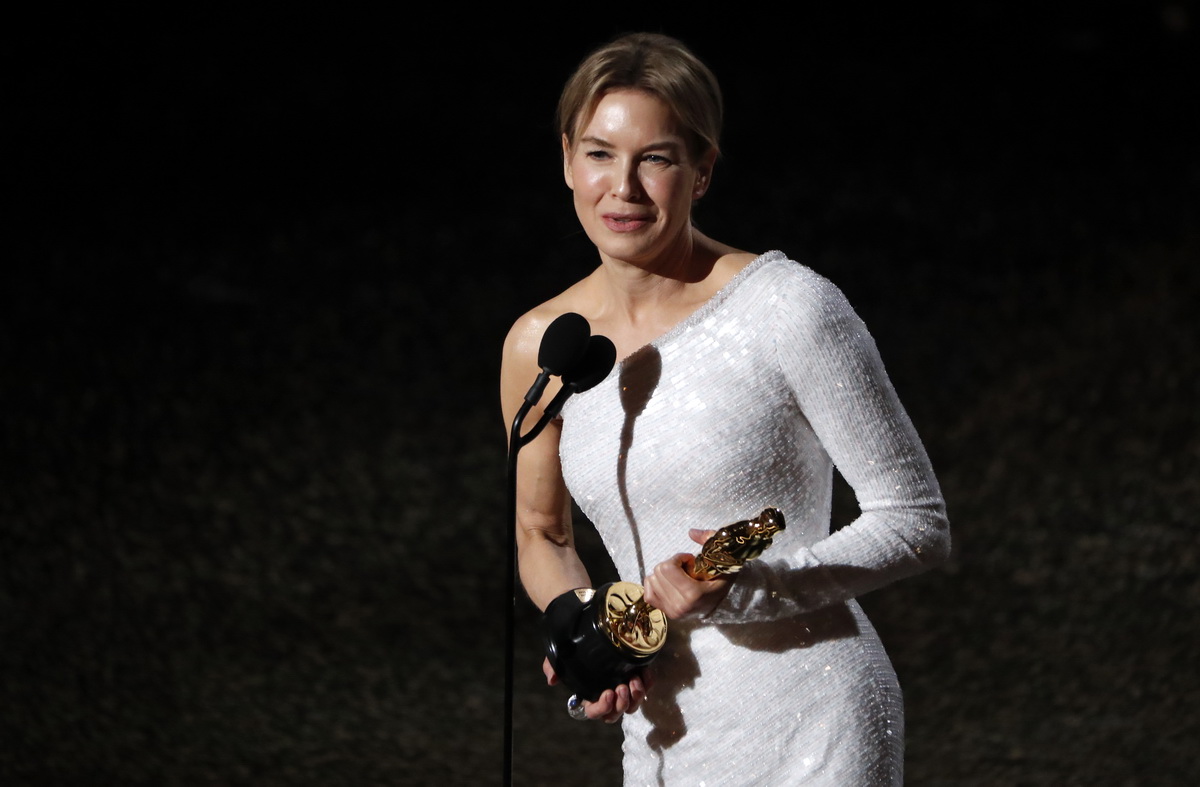 LOS ANGELES, Feb 9 - Renee Zellweger was crowned best actress at the Oscars on Sunday for her portrait of Hollywood legend Judy Garland in "Judy," a biographical drama exploring the singer's personal and professional turmoil at the end of her life.

It marked the second Oscar victory in four nominations for Zellweger, 50, a Texas-born performer whose immersion in the role of Garland also earned Golden Globe, Screen Actors Guild and BAFTA awards.

She faced a field of nominees that included Charlize Theron for "Bombshell," as well as Scarlett Johansson for "Marriage Story," Cynthia Erivo for "Harriet" and Saoirse Ronan for "Little Women."

Admittedly intimidated at the notion of playing one of America's most iconic show business figures 50 years after her death, Zellweger embarked on extensive preparations to transform herself for the role.

She took voice lessons for a year and worked with a choreographer to capture Garland's mannerisms. The movie focuses on a period when "The Wizard of Oz" star struggled with substance abuse, depression, insomnia, financial instability and a custody battle.

Garland arrived in London in late 1968 as part of a sold-out concert tour meant to help regain her economic footing. She died there at age 47 of an accidental drug overdose in June 1969, three months after her fifth marriage.

Zellweger's co-stars recalled being awestruck by her on-set metamorphosis for the role, while critics marveled at how she convincingly rendered the essence of Garland's persona and performance style without lapsing into mere impersonation.

Her "Judy" performance was a far cry from the scrappy, plain-spoken farmhand she played in the epic U.S. Civil War romance "Cold Mountain," a role that earned her an Academy Award for best supporting actress in 2004.

Her turn in "Cold Mountain" followed back-to-back Oscar nominations for her performance as Roxie Hart in the big-screen adaptation of musical "Chicago" and her title role as the British singleton in the romantic comedy "Bridget Jones's Diary."

A native of Texas, Zellweger got her start in several low-budget movies leading to a star turn in 1994 horror film "Texas Chainsaw Massacre: The Next Generation."

Her big breakthrough came in the role of the single mom who becomes the love interest of the struggling sports agent played by Tom Cruise in comedy "Jerry Maguire." Other credits include "One True Thing," "Me, Myself & Irene," and the dark comedy "Nurse Betty."