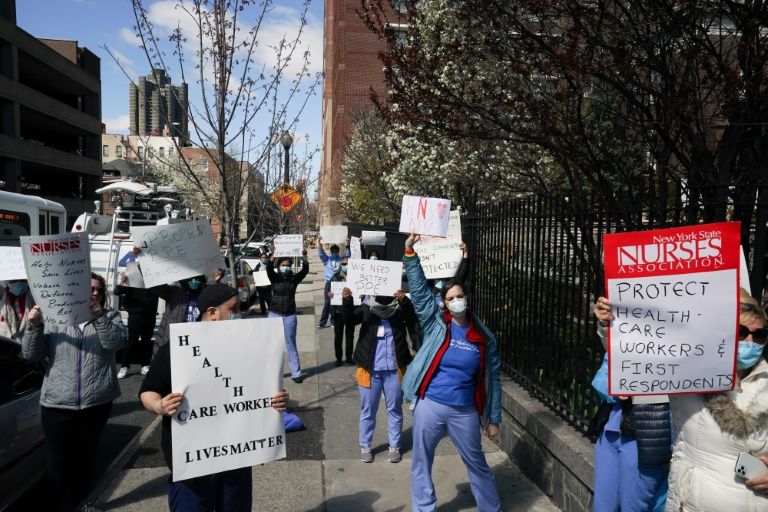 New York -- "Soldiers don't go to war without guns, why should nurses come to work without protective equipment?" asked Leyrose McIntyre, one of around 30 nurses demonstrating outside a New York hospital on Thursday.

The protest, rare in the age of social distancing, was over a lack of masks, gowns, and other protective equipment for health workers treating coronavirus patients in the epicenter of America's deadly pandemic.

New York has recorded almost 100,000 confirmed cases -- including some 2,300 deaths -- and the nurses say a shortage of equipment is putting their lives at risk.

Led by their union, the New York State Nurses Association, the nurses spread out along the fence outside Montefiore Medical Center, in the Bronx, careful to keep some distance between them.

They were masked, wore black ribbons in solidarity with all COVID-19 patients, and held up placards denouncing a shortage of "PPE," personal protective equipment, the rationing of which is affecting staff across New York's hospitals.

"We are the warriors on the frontlines... we don't have the arms and the armor to protect ourselves against the enemy," association president Judy Sheridan-Gonzalez told AFP.

Her colleagues each had a story to tell.

Benny Mathew, 43, said he was infected after treating at least four coronavirus patients without the proper equipment.

On March 25, a test for COVID-19 returned positive. However, by March 28 his fever had gone and the hospital asked him to return to work.

"They told me if you dont have fever you can come on work -- that was their only criteria," he said.

"I was told to wear a mask and come to work. We don't have enough staff so I think it was my duty to come back.

"But I was worried that I was going to transmit the disease to my coworkers, to the patients who don't already have it," he added.

Mathew -- who has followed the progression of the epidemic in Italy, where his sister lives -- has isolated himself from his wife and children at home since early February when the first suspected cases entered his hospital.

Stretched hospitals have had to transform outpatient wards to deal with the influx of patients, according to Jacqueline Anom, a nurse at Montefiore's ambulatory surgery unit, also in the Bronx.

Patients are not supposed to spend the night at the 11-storey building where there are no showers, no rooms with doors and no proper beds.

But coronavirus-infected patients have been brought there on stretchers since Tuesday, and are staying.

"I didn't have the equipment for things I needed to do," said Anom, who was one of the first to treat an infected patient.

Without the right equipment, she dared not leave the treatment room for most of her 12-hour shift even to go to the toilet for fear of contaminating her mask and scrubs.

"It's just chaos. I have been doing this for 20 years and it is the first time in my life I am so unsure.

"It is very upsetting and I am outraged: because we are in America, we should not have to be fighting for PPE," she said.