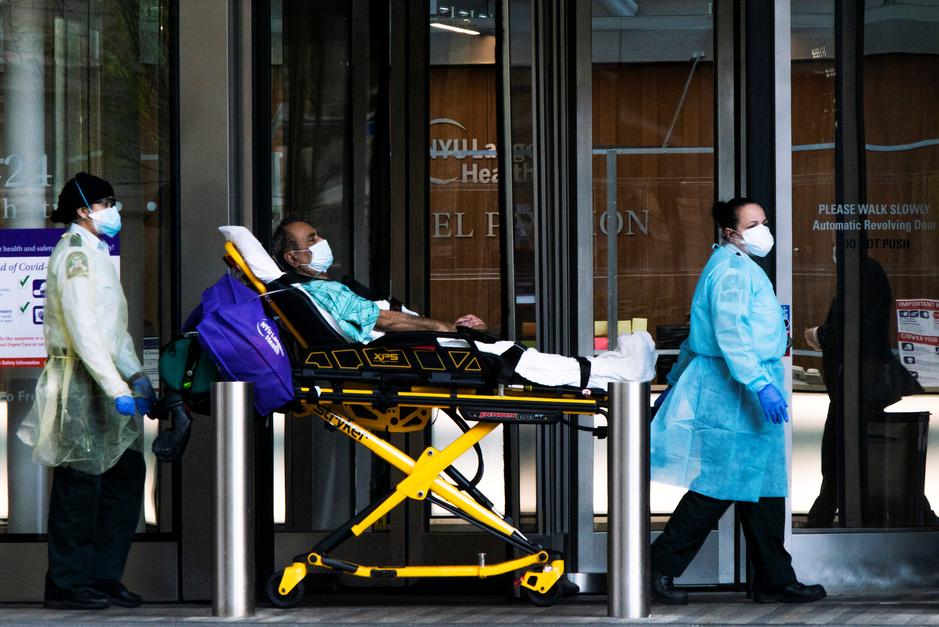 NEW YORK -- Nearly 135,000 Americans were forecast to die from COVID-19 through the beginning of August, almost double the last prediction, due to loosening of lockdowns, according to an updated forecast from the University of Washington on Monday.

The university’s Institute for Health Metrics and Evaluation (IHME) said the sharp increase from its last estimate in mid-April reflected rising mobility and the easing of social distancing measures in 31 states by May 11.

Used by the White House, the institute’s models tie the increased deaths to increasing contacts among people that promote transmission of the novel coronavirus, which causes the COVID-19 respiratory disease.

The Trump administration’s confidential forecast, based on government modelling, projects that the coronavirus will kill 3,000 Americans a day by the end of May, the Times said, up from a current daily toll that a Reuters tally places at around 2,000.

The confidential report, pulled together in chart form by the Federal Emergency Management Agency, forecast about 200,000 new cases each day by the end of the month, up from the current rate of about 25,000 cases every 24 hours, the Times said.

The Post reported similarly that a “draft” government document predicted a sharp increase in both known coronavirus infections and deaths beginning around May 14 and escalating to a rate of about 200,000 new cases and 3,000 new fatalities each day by June 1.

The Post quoted a Johns Hopkins Bloomberg School of Public Health professor of epidemiology involved in the work as saying the data contained a wide range of possibilities and modelling and was shown to the Centers for Disease Control and Prevention as a work in progress.

Asked about the Times report, White House spokesman Judd Deere said: “This is not a White House document, nor has it been presented to the Coronavirus Task Force or gone through interagency vetting.”

The highly contagious coronavirus is known to have infected more than 1.1 million Americans, including nearly 68,000 who have died from COVID-19, according to Reuters’ own tally.

Trump has given varying predictions for the number of people in the United States who will succumb to COVID-19, which has no vaccine or known cure.

But on Sunday night the president acknowledged the death toll may climb much higher.

In New York, the state that accounts for about a third of all U.S. infections, Governor Andrew Cuomo on Monday outlined plans to ease restrictions on a regional basis. He sketched out the plan while at least half of the other 50 states moved ahead with plans of their own to restart stricken businesses.

Without giving a specific time frame, Cuomo told a daily briefing that construction, manufacturing and the wholesale supply chain would be allowed to start up under the first phase of a four-step return to normality.

The state’s stay-at-home order, in place since mid-March, is due to expire on May 15, and the Democratic governor has said previously that some regions outside the New York City area with a relatively low number of cases may start lifting restrictions after that date.

“Reopening is more difficult than the close-down. The close-down was relatively simple,” he said, cautioning that every part of the state of 19 million people needed to move gradually.

Cuomo gave the most detailed sketch so far on how the state would start to loosen restrictions on businesses and daily life.

In the final phase, arts, entertainment and recreation facilities and education would restart.

While he did not specify which regions would open first, Cuomo showed a slide indicating the more rural northern and central parts of the state as “lower-risk regions” in contrast to the “higher-risk regions” which included New York City.

Florida began a gradual reopening of its economy on Monday. In the first phase, retail merchants and restaurants will open, with indoor patronage limited to 25% of capacity. Eateries are also allowed to open outdoor seating with social distancing, and medical practices can resume elective surgeries and procedures.

But schools, movie theatres, bars and fitness clubs will remain shut. Governor Ron DeSantis had drawn criticism for waiting until April 2 to clamp down on commerce after most other states had done so. More than a fifth of Florida residents are aged 65 and over, putting them in a category of those at greater risk from the virus.

In Ohio, Governor Mike DeWine was allowing construction and manufacturing to reopen on Monday, and letting office workers return.