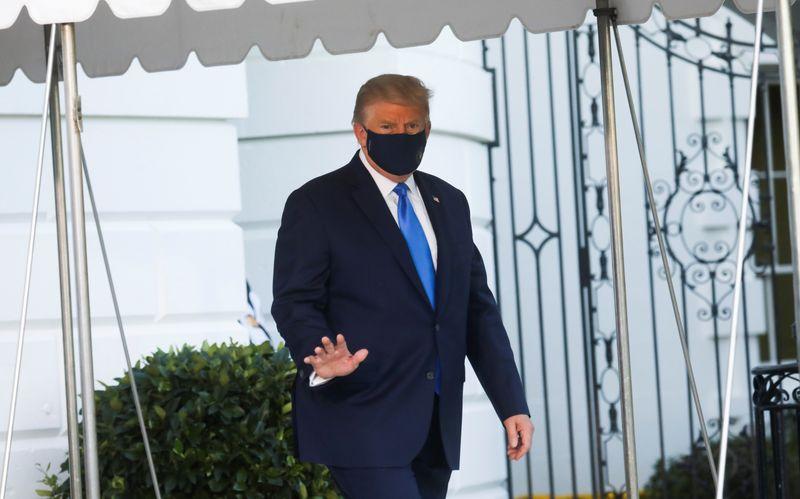 WASHINGTON — U.S. President Donald Trump moved to a military hospital for treatment on Friday after being diagnosed with COVID-19 as his administration and re-election campaign scrambled to adjust to an extraordinary twist in his turbulent presidency.

Roughly 17 hours after he announced he had tested positive for the coronavirus, Trump walked slowly from the White House to a waiting helicopter to be taken to Walter Reed National Military Medical Center in Bethesda, Maryland. He wore a mask and business suit and did not speak to reporters.

“I think I’m doing very well, but we’re going to make sure that things work out,” Trump said in a brief video posted to Twitter.

Trump will work in a special suite at the hospital for the next few days as a precautionary measure, White House press secretary Kayleigh McEnany said.

Trump, 74, has a mild fever, according to a source familiar with the matter.

White House doctor Sean P. Conley said he is being treated with an experimental drug cocktail and is “fatigued but in good spirits.”

It was the latest setback for the Republican president, who is trailing Democratic rival Joe Biden in opinion polls ahead of the Nov. 3 presidential election.

Trump, who has played down the threat of the coronavirus pandemic from the outset, wrote on Twitter earlier on Friday that he and his wife Melania were going into quarantine after testing positive for the virus, which has killed more than 200,000 Americans and severely damaged the U.S. economy.

An active Twitter user, Trump has posted only the short video since then.

Trump is at high risk because of his age and weight.

He has remained in apparent good health during his time in office but is not known to exercise regularly or to follow a healthy diet.

The drug is one of several experimental COVID-19 drugs known as monoclonal antibodies, which are used for treating a wide range of illnesses.

U.S. infectious disease chief Dr. Anthony Fauci is among those saying the technology has promise.

The president’s illness upended his re-election campaign with just 31 days to go until Election Day.

The campaign said it would postpone rallies and other events where he was scheduled to appear, or take them online.

Biden pulled ads attacking Trump off the air but otherwise continued his campaign, traveling to Michigan on Friday after testing negative for the virus.

At a union hall in Grand Rapids, Biden said he was praying for his rival’s recovery.

However, he also implicitly criticized Trump, who has mocked Biden for routinely wearing a mask and has held huge campaign rallies with little social distancing.

“It’s not about being a tough guy. It’s about doing your part.”

Trump’s illness also raised questions about the health of others atop the U.S. government.

Vice President Mike Pence, who would take over if Trump were to fall severely ill, has tested negative, a spokesman said.

The former Indiana governor, 61, is working from his own residence several miles from the White House.

Harris has also tested negative for the virus, according to the campaign.

Three journalists tested positive on Friday after spending time over the weekend at the White House or traveling with Trump, according to Zeke Miller, an Associated Press reporter and president of the White House Correspondents’ Association.

The Republican National Committee would choose a replacement nominee if Trump were to become incapacitated, but it is already too late in most states to change the names on the ballot.

Some 2.9 million people have already voted, according to figures compiled by University of Florida professor Michael McDonald.

At least three people who were at a White House event to announce her nomination, University of Notre Dame President John Jenkins and Republican senators Mike Lee and Thom Tillis, said Friday they have tested positive.

Lee and Tillis are both members of the Republican-controlled Senate Judiciary Committee, which is scheduled to begin hearings on Barrett’s nomination on Oct. 12.

Barrett herself tested positive for the virus earlier this year and recovered, according to a person familiar with the matter.

Tillis, who said in a statement that he has no symptoms, will isolate at home for 10 days.

Polls show a close race between him and Democratic challenger Cal Cunningham for his North Carolina seat, one of several Democrats hope to flip in their quest to win a Senate majority in November.

Trump is the latest world leader to contract the virus, which can cause a severe respiratory infection.

Brazilian President Jair Bolsonaro called the virus a “little flu” after being infected in July. Both men recovered.