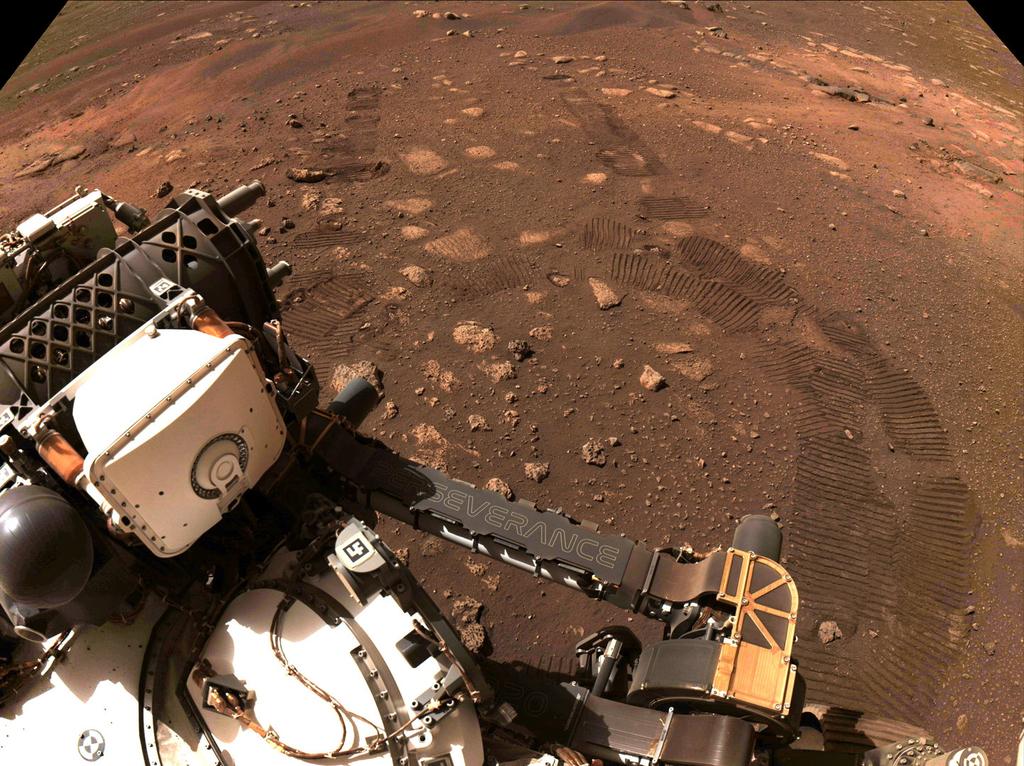 LOS ANGELES -- NASA’s Mars rover Perseverance has taken its first, short drive on the surface of the red planet, two weeks after the robot science lab’s picture-perfect touchdown on the floor of a massive crater, mission managers said on Friday.

The six-wheeled, car-sized astrobiology probe put a total of 6.5 meters (21.3 feet) on its odometer on Thursday during a half-hour test spin within Jezero Crater, site of an ancient, long-vanished lake bed and river delta on Mars.

Taking directions from mission managers at NASA’s Jet Propulsion Laboratory (JPL) near Los Angeles, the rover rolled 4 meters (13.1 feet) forward, turned about 150 degrees to its left and then drove backward another 2.5 meters (8.2 feet).

“It went incredibly well,” Anais Zarifian, a JPL mobility test engineer for Perseverance, said during a teleconference briefing with reporters, calling it a “huge milestone” for the mission.

NASA displayed a photo taken by the rover showing the wheel tread marks left in the reddish, sandy Martian soil after its first drive.

Another vivid image of the surrounding landscape shows a rugged, ruddy terrain littered with large, dark boulders in the foreground and a tall outcropping of rocky, layered deposits in the distance - marking the edge of the river delta.

Some additional, short-distance test driving is planned for Friday. Perseverance is capable of averaging 200 meters of driving per day.

But JPL engineers still have additional equipment checks to run on the rover’s many instruments before they will be ready to send the robot on a more ambitious journey as part of its primary mission to search for traces of fossilized microbial life.

So far, Perseverance and its hardware, including its main robot arm, appear to be operating flawlessly, said Robert Hogg, deputy mission manager.

The team has yet to conduct post-landing tests of the rover’s sophisticated system to drill and collect rock samples for return to Earth via future Mars missions.

NASA announced it has named the site of Perseverance’s February 18 touchdown as the “Octavia E. Butler Landing,” in honor of the award-winning American science-fiction writer. Butler, a native of Pasadena, California, died in 2006 at age 58.