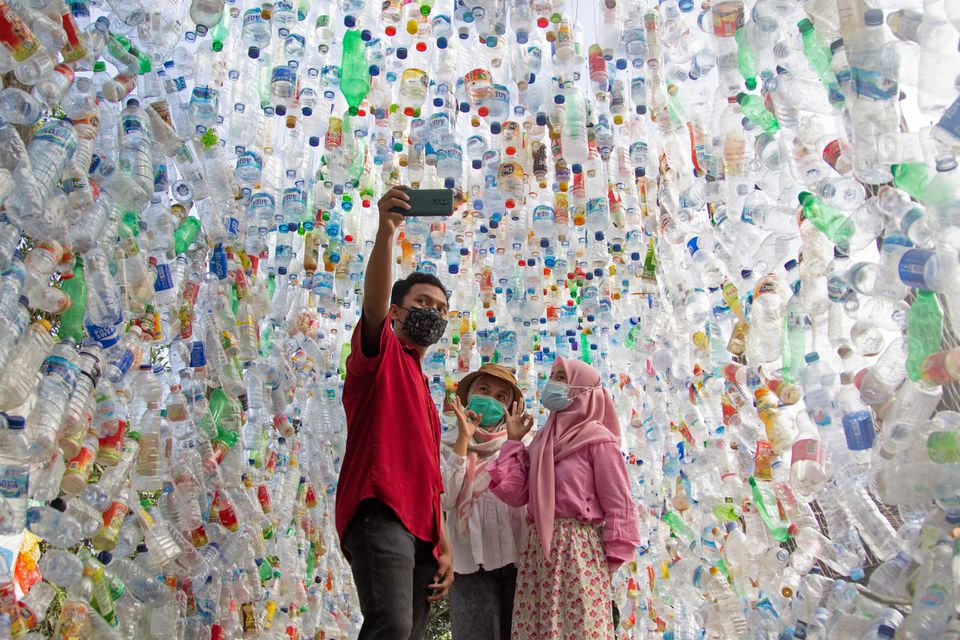 GRESIK, Indonesia -- Environmentalists in Indonesia keen to send a message about the world's worsening ocean plastics crisis have created a museum made entirely from plastics, to convince people to rethink their habits and say no to single-use bags and bottles.

The outdoor exhibition in the town of Gresik in east Java took three months to assemble and is made up of more than 10,000 plastic waste items, from bottles and bags to sachets and straws, all collected from polluted rivers and beaches.

The centrepiece is a statue called "Dewi Sri", a goddess of prosperity widely worshipped by the Javanese. Her long skirt is made from single-use sachets of household items.

"We want to send information to the people to stop the use of single-use plastic," said the museum's founder Prigi Arisandi.

"These plastics are very difficult to recycle... Starting today, we should stop consuming single-use plastic because it will pollute our ocean, which is also our source of food."

The plastics problem is particularly acute in Indonesia, an archipelago nation that ranks second only behind China for its volume of plastics that end up in the seas.

Together with the Philippines and Vietnam, the four countries are responsible for more than half of ocean plastics and Indonesian efforts to regulate use of plastic packaging has had mixed results.

The exhibition has received more than 400 visitors since it opened early last month.

Ahmad Zainuri, a student, said it had opened his eyes to the scale of the problem.

"I will switch to a tote bag and when I buy a drink, I will use a tumbler," he said.

The museum has become a popular location for selfies shared widely on social media, where visitors pose against a background of thousands of suspended water bottles.

"I will have to buy reusable things such as drinking bottles instead of buying plastic bottles," said student Ayu Chandra Wulan. "By looking at how much waste there is here, I feel sad."