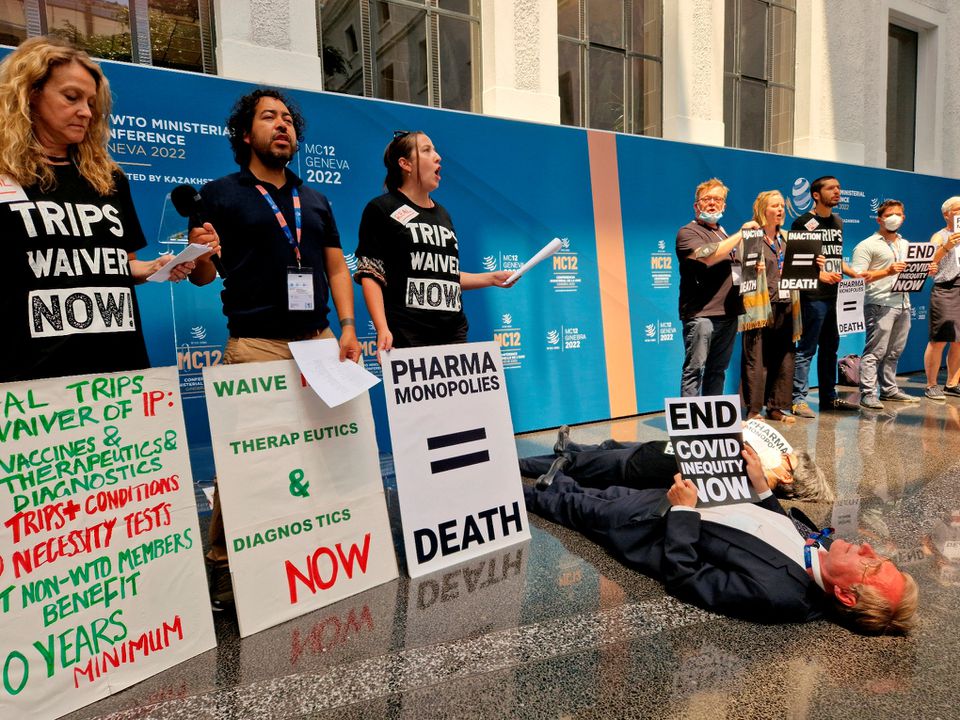 GENEVA -- The World Trade Organization chief presented countries with a series of trade agreements early on Friday that included pledges on health, reform and food security and urged that they be accepted.

The deals were ground out over five days of bargaining at a conference of over 100 trade ministers, and are seen as a test of the ability for nations to strike multilateral trade deals amid high geopolitical tensions. One agreement has already been reached, on maintaining a moratorium on e-commerce tariffs.

In the letter presenting the documents, signed by director-general Ngozi Okonjo-Iweala and two WTO chairs, she asked members to consider the "delicate balance" achieved after nearly round-the-clock talks that were extended for an extra two days and have at times been charged with anger and frustration.

"The nature of compromise is that no one gets all of what they want," the letter said. "Let us complete our work tonight so we can honour those out there waiting for the WTO to deliver."

At one stage, a series of old and new demands from India, which sees itself as the champion of poor farmers and fishermen as well as developing countries, appeared set to paralyse talks but accommodations were found, trade sources said.

India's Commerce Minister Piyush Goyal struck an upbeat and conciliatory tone on Thursday. "India is convinced that this will turn out to be one of the most successful ministerials that the WTO has seen in a long time," he said, smiling broadly.

The package, which Okonjo-Iweala described as "unprecedented" did not yet include two of the most important deals under consideration: fisheries and a partial waiver for intellectual property rights for COVID-19 drugs. However, trade sources said the talks had been concluded and they would soon be added. At one point, applause burst out from one of the negotiating rooms in the early hours.

In line with the WTO's consensus rule, all the deals still need to be approved by the body's 164 members at a meeting on Friday that began at around 0200 GMT.

To be sure, many of the agreements have been watered down in negotiations this week in efforts to accommodate all interests.

The fishing subsidies deal that has the potential to reverse collapsing fish stocks has been pared back significantly; the vaccine waiver is far narrower than the one originally sought; and a plan to reboot the WTO's top appeals chamber through reform lacks details, critics say.

Still, many observers were broadly supportive and say the deals could boost the troubled 27-year-old body which has not struck a global trade deal since a red-tape-cutting Trade Facilitation deal in 2013.

"There's now a package on the table at (the ministerial conference) that would provide a real boost to the credibility and strength of the WTO system," said John Denton, Secretary General of the International Chamber of Commerce.