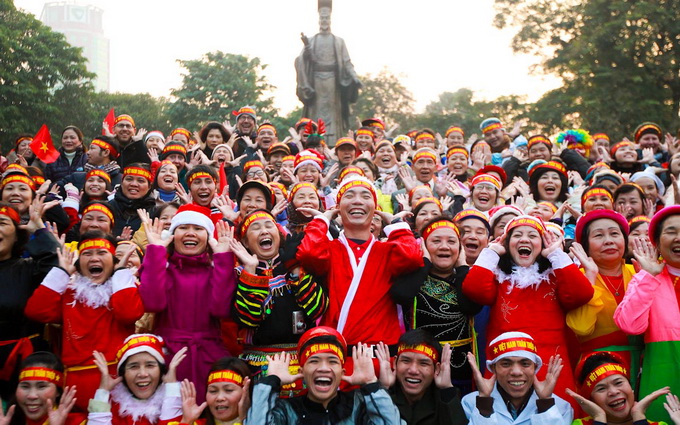 Some 200 members of the Hanoi Laughter Yoga Club gathered with foreigners at the Ly Thai To monument in Hanoi’s iconic Guom Lake to laugh out loud and share warmth and love on the chilly morning of Dec 22.

Donning various costumes, including doctor, soldier, and police uniforms, “ao dai,” and Santa Claus outfits, participants laughed as hard as they could during Laughter Yoga exercises. Everyone, including foreigners, gave each other big hugs and exchanged loving words.

“With participants from all walks of life holding hands and laughing merrily, we’d like to express our hopes that Vietnamese people will live in harmony and peace and be spared all the troubles and worries of daily life,” shared Le Anh Son, chair of the club.

This is the second time the club has held the Laughter Yoga session in celebration of Christmas and the New Year at Guom Lake.

Laughter Yoga (Hasyayoga) was founded by Dr. Madan Kataria in Mumbai, India in 1995. Since then, it has grown to be a worldwide phenomenon with more than 7000 Laughter Clubs in about 70 countries.

In early 2011, Dr. Kataria came to Vietnam to launch the first Laughter Club in the country by giving a training course in the unique therapy to the first batch of local students.

Laughter Yoga was later introduced to Hanoi by Le Anh Son, currently the president of the club, who attended a training course in Bangalore, India. Since his return to the capital city, Son has helped turn Laughter Yoga into a unique morning exercise for Hanoians.

According to Dr. Kataria, the success of Laughter Yoga lies in helping people laugh as genuinely as possible, without humor, funny jokes, or comedy – all they need is a willingness to laugh.

Laughter Yoga is a combination of Laughter Exercises with Yogic Breathing (pranayama), so that one increases the amount of oxygen in one’s body while being playful. The result is a feeling of being healthy, energized, and alive. There are about 350 to 400 different Laughter Yoga poses, and practitioners can make up new postures that suit them.

In addition to Hanoi, Laughter Yoga clubs have been set up in other provinces and cities in Vietnam, and draw a large number of participants due to its notable health benefits.