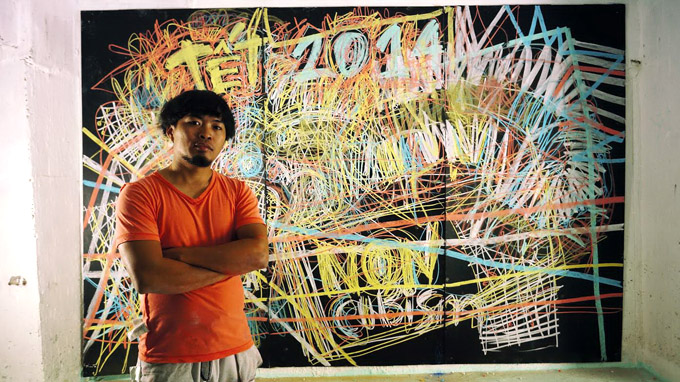 Nguyen Quoc Dan, who was featured on Japan’s NHK in 2011, is holding his exhibit of chalk paintings on Non-Cubism, an art school which goes against most revered artist Pablo Picasso’s Cubism. The exhibit is running in Ho Chi Minh City until Jan 27 and is also showcased online.

The exhibit, “Non-Cubism – Chalk”, going on at 36 Dinh Bo Linh, Binh Thanh district and on  www.facebook.com/cordteam and YouTube, features 10 of Dan’s large-sized works, which measure some 4m in width.

His works don’t comply with the conventional shaping and color mixing approaches. Instead he makes use of adjacent colored lines to create interaction and striking visual impressions.

“While chalk is being used less in schools, I want to promote its artistic uses to people. Chalk isn’t used to smear walls but is a safe, cheap means to artistically prettify the city,” Dan shared about his choice of chalk in his paintings.

The 30-year-old artist first introduced his non-cubism artworks to the public in his first exhibit in 2011. Both local experts and art enthusiasts were quite dubious about its artistic values and chances of success at that time, but only some months later, Dan’s “weird-looking” paintings got the attention from NHK’s Art Beat program. The program crew spent more than one week in Vietnam to learn about him and create an episode featuring him and his Non-Cubism artworks.

Dan, who likes to wear his clothes inside out and makes his own footwear and bags, has never sold a single painting of his own after his three exhibits though they fetched good prices, as he considers himself an artist, not an art dealer. He does other jobs such as decorating and trademark designing to support his main job and finance his new “eccentric” projects.