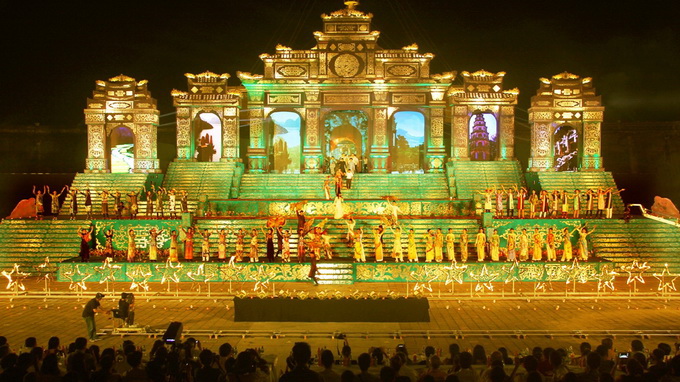 By the end of last Sunday, 49,181 tourists, including 21,604 foreigners, arrived in Hue to join the 2014 Hue Festival, which opened last Saturday and closes on April 20, the festival’s organizer announced at the April 14 press conference.

According to Ngo Hoa, head of the festival’s organizing board, the international tourists come from over 100 countries and territories.

Most hail from France, Thailand, Australia, the UK, the U.S., and Japan.

The total number of tourists this year is higher than in previous years, Hoa noted.

Hotel room occupancy has reached 100 percent. Tourists who join tours provided by local travel companies take up to 80 percent of the total number.

Apart from visiting Hue’s iconic scenic spots, tourists are given free tickets to the festival’s shows.

Hoa added that the art and music shows have gone on as scheduled, with the highest security ensured for visitors. No rip-offs have been reported so far.

Over 700 reporters from 127 local news agencies and 25 correspondents from 11 foreign ones have arrived to cover central Hue City’s biennial, hallmark festival that was first held in 2000.

Most of the festival’s shows have been a resounding success.

Like in previous years, the “ao dai” (traditional Vietnamese gown) show, themed “The World in the Vietnamese Ao Dai,” which took place on Monday evening and will be organized again on Thursday evening, has always been one of the most-attended shows.

The event, which is scheduled to close with sparkling fireworks displays by famed French pyrotechnic expert Alain Hubert and to be broadcast live on national channels VTV1 and VTV4, will be held at Ngo Mon Square at 8:30 pm tonight. Another of the 2014 Hue Festival’s notable highlights is the Thanh Toan countryside market, which closed on Wednesday.

The organizers and the Japan International Cooperation Agency (JICA) have jointly released “Thanh Toan Tourist Map” in both Vietnamese and English to better promote the market and provide more specific guidance to festival goers.