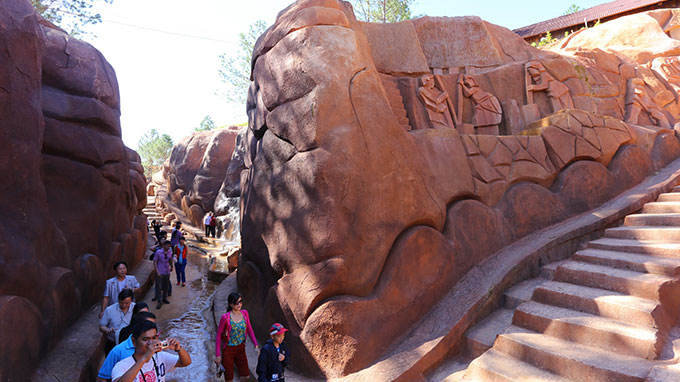 A Vietnamese man has created a fresco that depicts Da Lat’s tourist destinations with basalt, a natural resource prevalent in the area.

Known as a romantic resort town, Da Lat is the capital of Lam Dong Province in the Central Highlands.

The sculptures are featured at the Dat Do Tourism Complex, owned by Sao Da Lat Co., which is located on a hill near Tuyen Lam Lake.

Also carved in the walls are replicas of houses built by Lach and Co Ho ethnic minorities, the city’s native residents.

Their daily lives are vividly depicted on the walls, alongside familiar trees, houses and fruits.

Many tourists consider the complex a guide to Da Lat, as the tunnel illustrates every aspect of the resort town.

The tunnel also reflects the history of the town, from the settling of native minorities to the discovery of the Lang Biang Plateau in 1893 by French-Swiss physician-bacteriologist Alexandre Yersin.

The final part of the tunnel depicts beautiful flower fields and planes taking off from Lien Khuong Airport, which reflects the artists’ hope of a bright future for Da Lat.

One especially important section of the tunnel is the replica of the sovereignty house. On the roof of the house is a relief of a 2.75 x 11m map of Vietnam, which features Hoang Sa (Paracel) and Truong Sa (Spratly) archipelagos.

Its interior furnishings such as sinks, bathtubs, fireplaces and furniture are all made from basalt and additives.

Dung, the tourism complex owner and mastermind of the unique tunnel, called the structure “a mere book cover of Da Lat.”

“After five years of living in Da Lat, I learned that the architectural and cultural icons boast great aesthetic and historical values and mean a lot to locals. So I’ve tried my best to convey their importance through my recreations,” he shared.

In order to realistically illustrate the 120-year history of Da Lat on the walls of the tunnel, Dung conducted extensive research from materials collected by experts and elderly locals.

He shared that at 17, he was inspired to be an artist while he was working at a wedding card shop.

In 1996, Dung came back to Vietnam after studying in Germany, and joined his friends in producing plastic furnishings, which prepped him for his future tunnel project.

Captivated by sculpture tunnels the world over, he was set on building one of his own.

However, he still could not find a suitable material for his project.

One day in mid-2008, while he was digging, he discovered that if basalt is solidified, it is as durable as mortar.

It took Dung two years to make a special glue to solidify basalt as well as a paint from basalt which he paints over any other materials used in his sculptures.

In 2010, he kick-started his project. After three years, the amount of basalt dug to create his tunnel was well over 85,000m³.

According to Dung, basalt is very soft and easy to shape.

Workers use special knives to carve the basalt into their desired shapes.

Mortar made from basalt is then applied to the detail, which solidifies after drying for three hours.

Dung added that he used to be bothered by basalt, as the wet, slippery soil caused him at least five minor accidents.

“Now Da Lat’s basalt is my kin,” he said with a smile.