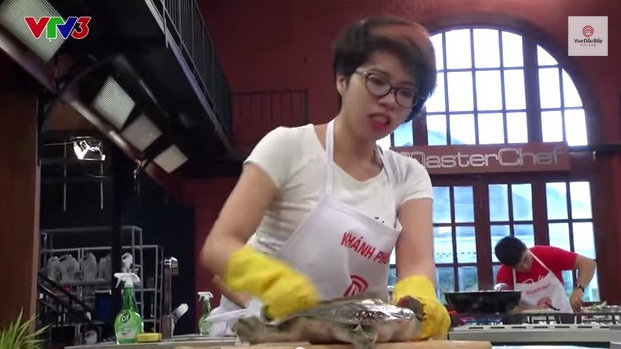 A Vietnam Television (VTV) channel has admitted it made a mistake in not censoring footage of the beheading of a live turtle so it appeared in an episode of a popular cooking show that was publicly aired last weekend.

Contestant Khanh Phuong and VTV3 – an entertainment channel of VTV – have received much criticism after the beheading was seen clearly in the 10th episode of the second season of the “Vua Dau Bep – MasterChef Vietnam” cooking show which was broadcast on September 20.

“We take full responsibility for this incident. A mistake was made in our image censoring process,” admitted Lai Van Sam, head of the Sports, Entertainment, and Economy Information Desk of VTV3. “That image should not have been aired on TV. This is an unwanted incident,” Sam explained.

BHD Multimedia Company, a Vietnamese firm that joined VTV3 in purchasing the show’s format and re-producing it in the Southeast Asian country, has been asked to cut off this graphic image for a re-airing schedule, he said, adding that the company has also been requested to be more careful in recording future images.

A clip of the beheading posted on YouTube shows that in the skill challenge category, Khanh Phuong was very clumsy to deal with a live turtle as a challenge she had to face because the reptile repeatedly hid its head.

Due to time pressure and for fear of being eliminated from the competition, Phuong angrily sever the reptile’s head with a knife as it jutted out. Another contestant was also seen beheading a separate turtle in the background.

THE FOLLOWING VIDEO CONTAINS IMAGES THAT MAY BE DISTURBING TO SOME VIEWERS.

Thanh Lap, a viewer in Ho Chi Minh City’s Go Vap District, said “it is unacceptable such a graphic image was broadcast on a national TV channel.”

Another viewer, Nguyen Thao from the city’s Binh Thanh District, asserted she will no longer watch the TV program again following VTV3’s blunder.

“I myself kill fish, chickens, and shrimp as ingredients for meals but I do so at home. This was a TV show, so such an image was unbearable,” Thao said.

A third viewer known as Gia Pho said cutting off a turtle’s head during that cooking process was not an “inhuman act” but the image editor and director should be slammed because nobody wanted their kids to see this horrific scene on TV.

According to many viewers, footage of animals being killed for food is often blurred or even deleted in the MasterChef versions of other countries.

However, Tuan Hai, a member of the Vietnamese jury, said dealing with a live turtle was related to the contestant’s performance.

He added that the jury members could not interfere in what was going on during the show because “MasterChef Vietnam” is a reality TV program.

Real chefs have to work on raw materials, the juror said, adding that beheading the turtle simply showed how Phuong dealt with a specific situation.