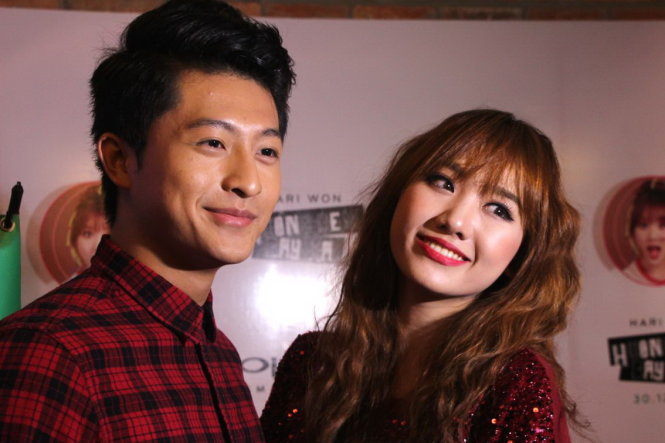 An emerging half-Korean singer has released her debut music video in the Vietnamese language.

Hari Won, who was born to a South Korean mother and a Vietnamese father, introduced her maiden music video “Huong Dem Bay Xa” (The Night Scent Wafts Far Away) on Tuesday.

The video features the 30-year-old singer dancing boisterously to a catchy tune and singing in perfect Vietnamese.

Harry Lu, a Taiwanese singer who was born in Vietnam, also starred in the video.

Hari released her single of the same name in mid-November after practicing her command of Vietnamese for one year.

The song has been warmly embraced and secured top spots on local online music billboards.

Hari taps into the single’s success and turns it into a K-pop-style music video, with all the scenes shot in a film studio.

The singer has lived in Vietnam in the past 10 years and is set to establish a firm footing in the Vietnamese showbiz as a versatile artist.

Her good looks, boisterous, outgoing personality, and adequate command of Vietnamese and English – apart from Korean – have added to her appeal to fans.

Hari has been a household name to many young Vietnamese thanks to her regular appearance in reality shows, such as “The Amazing Race Vietnam” and the Vietnamese version of “Thank God You're Here,” an Australian improvised comedy.

She also acts as a host in several music shows, particularly those featuring such Korean bands as T-ara.