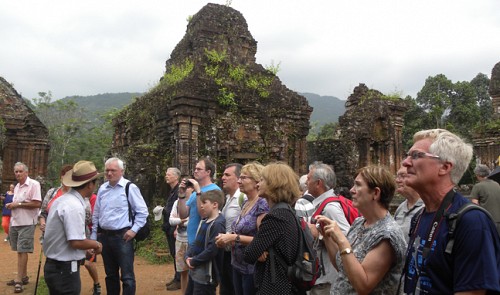 India to provide $2.5mn to restore My Son Sanctuary in central Vietnam

The Indian government will supply a funding package of roughly US$2.5 million for a project to restore the UNESCO-recognized My Son Sanctuary in central Vietnam.

According to a memorandum on the restoration of My Son Sanctuary between Vietnam and India last year, Indian experts are scheduled to arrive in the central province of Quang Nam, where the relic complex is located, in April to offer technical assistance to their Vietnamese counterparts in properly revamping and preserving the treasured complex of Cham temples.

The Vietnam National Administration of Tourism (VNAT) cited Dinh Hai, director of the provincial Department of Culture, Sports, and Tourism, as saying that the Indian side will pump over VND54 billion (roughly $2.5 million) into the restoration of the temples over a five-year project.

During the implementation of the project, India will dispatch its experts and provide their Vietnamese counterparts with equipment and materials.

In May last year, two ancient Cham towers in the UNESCO-recognized sanctuary leaned and sunk to an alarming extent, according to the relic’s management agency.

Nguyen Cong Khiet, vice head of the relic’s management board, said at the time that the B3 and B5 towers were sustaining increasingly worrying damage.

The serious deterioration requires immediate attention to save the towers from leaning further or even collapsing, and help them brace for future storms.

The two towers, which were on the brink of collapse in late 2013, showed signs of further decay, erosion, and cracking.

Many of the relic’s towers have also incurred wide cracks, sinking, and erosion for more than 10 years now, Khiet added.

Several international organizations, the UNESCO office in Hanoi, and the Italian, Japanese and Indian governments have offered assistance in the relic’s restoration over the years.

My Son Sanctuary is considered a hub of Hinduism in Southeast Asia, according to the VNAT.

The sanctuary dates from the 4th to the 13th centuries, according to the UNESCO World Heritage Center.

Its tower clusters were constructed over ten consecutive centuries in what then was the heart of the Champapura kingdom.

The towers of the My Son Sanctuary are the most significant constructions of the My Son civilization. They boast a wide variety of architectural designs, and were built with fired brick and decorated with sandstone bas-reliefs which depict Hindu mythology.

Restoration of the G Tower cluster, one of the key clusters at the sanctuary, by a group of Italian architects began in 1997 and was completed in early 2013.

The restored towers were opened to the public in late June that year.

Last year, a group of Indian experts also surveyed the site at length in search of preservation and restoration solutions.

My Son has been recognized by UNESCO as a world heritage site since 1999.