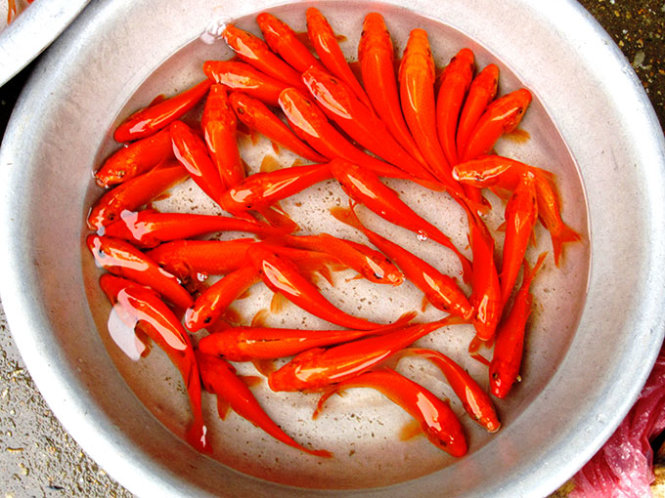 A village in a northern province which has long been known for raising carp and supplying the fish for a Tet (Lunar New Year) ritual is teeming with life ahead of the holiday.

Thuy Tram village in Cam Khe district of the northern province of Phu Tho is nestled on National Highway 32C along the Thao River.

The village has earned a long-standing reputation for raising and distributing the most gorgeous “ca chep do” (red carps) for a long-cherished Tet ritual.

A signboard at the entrance to Thuy Tram Red Carp Craft Village, located in the northern province of Phu Tho. Photo: Tuoi Tre.

The ritual is practiced on the 23rd day of the 12th lunar month, in which the fish are used as a means for Ong Tao (the Kitchen Gods) to ride to Heaven.

Over the past several days, the village has been bursting with commotion as many are busy catching and distributing the red carps to other provinces and cities across the country.

The town’s ponds have been turned red with large schools of carp, which signals the upcoming Tet.

Tet begins on February 19 this year, with festivities lingering for around one week after that.

According to the village elders, villagers raise red carps initially to enrich their own spiritual life.

Residents from neighboring villages and communes have gathered at the village’s market over the past few days to pick out red and yellow carp.

The gorgeous fish are kept in brass basins or nylon bags so that buyers can easily take their pick.

On the 23rd day of the 12th lunar month every year, Thuy Tram villagers themselves select the best fish as votive offerings to see off the Kitchen Gods to the Jade Emperor’s Palace.

After the ritual is complete, the fish are respectfully brought back to the ponds so that they can yield offspring for the next season.

The practice of the long-cherished tradition has gradually expanded into a thriving business, and the villagers began organized farming of the fish for profit.

They take advantage of their shallow ponds and harvested paddy fields to raise the young fish and feed them healthy, home-made food instead of products containing harmful growth stimulants.

More than 500 households in the village are engaged in red carp farming, with each family boasting at least two or three ponds.

After around five or six months of meticulous care, the fish are ready for harvest.

Red carps are stored in a tank after being harvested from ponds to wait for customers and traders to pick them up. Photo: Tuoi Tre.

The fish draw a large number of dealers from across the country, including those from Ho Chi Minh City, with their good size, nice shape and stunning color.

The village’s medium-sized fish are typically in greater demand than large ones.

A kilogram of red carp, consisting of between two to seven fish depending on their size, currently fetches around VND100,000 (US$5).

The village has been recognized as a crafts village since mid-2011, which provides great impetus for its residents to further develop the time-honored red carp farming tradition.

Basinfuls of red carps add colors to the Tet market sessions in the northern province of Phu Tho. Photo: Tuoi Tre.

In Vietnamese tradition, votive offerings are made to Ong Cong and Ong Tao (the Kitchen Gods) on the 23rd day of the last month of the lunar year.

The gods are traditionally believed to go to Heaven and brief Ngoc Hoang (the Jade Emperor) on the affairs of the owner of the house where they stay, and pray for luck, prosperity, and happiness for all household members in the new lunar year.

On Lunar New Year's Eve, the gods are believed to return to earth and resume their caretaking duties in the house’s kitchen.

A peddler is seen putting a live red carp into a nylon bag for customers to take a pick. Photo: Tuoi Tre.

On Ong Cong and Ong Tao festival day, or the 23rd day, Vietnamese people typically prepare a basin of water in which they put one large live carp or three or four small ones.

After the ritual is performed, the carp are set free into ponds or rivers.

The custom is meant to use the carp as a means for the genies to ride to Heaven and relates to the humanitarian release of animals, including birds and fish, as a merit-acquiring deed as well as one that brings good luck.

Among the votive offerings to Ong Cong and Ong Tao, while northerners prefer to offer a live carp, which is thought to transform into a dragon and fly through nine layers of the sky to Heaven, locals in central and southern Vietnam habitually use a woodblock print depicting a “flying stork and galloping horse” in place of the live carps.

They also prepare bountiful sweets, believing that such generous offerings will encourage the gods to say nice things to the Jade Emperor about them and shower them with good luck during the Lunar New Year.