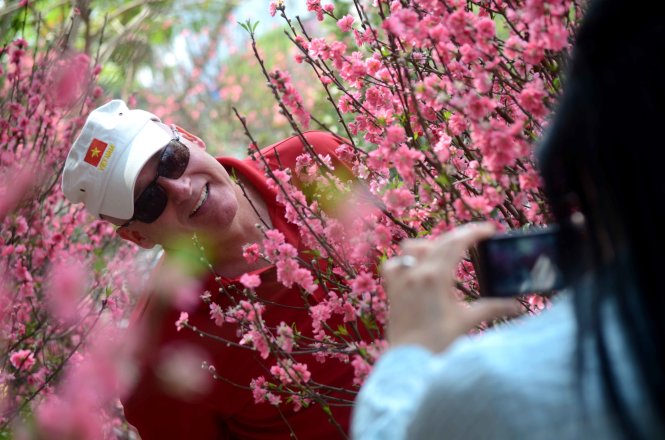 With Tet- the country’s largest traditional holiday- being only two days away, people have flocked to numerous flower markets in Hanoi and HCMC to buy gorgeous flowers to display around their homes or merely indulge in the festive atmosphere and relish the incredible flowering sights.

Cherry blossoms have long been one of the most alluring Tet flowers.

Over a century ago, Hang Luoc Street, part of the Vietnamese capital’s Old Quarter in Hoan Kiem District, has been frequented by sightseers and flower buyers as Tet comes.

According to archival documents, Hang Luoc was where comb craftsmen gathered back in the 15th and 16th centuries.

In 1912, the street gained its fame throughout Thang Long (the capital’s former name) as a flower market, with its flower bonanza coming from flower villages across the city and other northern provinces.

Except for 1947, when Hanoi was torn by war, not a year has gone by within over 100 years that the street is not home to its iconic Tet flower market sessions.

Today’s Hang Luoc Street, which is 264 meters in length, seems even smaller during the days prior to Tet as it is packed with flower shoppers and visitors. The annual Tet flower market is typically open since the 21th day of the current lunar year’s last month, but is actually teeming with life from the 26th to 29th days.

Locals and tourists, including foreigners, are usually seen walking in long, leisurely lines between rows of cherry blossom branches, tubs of daisies or trees laden with “quat” (small citrus fruits.)

Hanoi's Hang Luoc flower market is teeming with shoppers and visitors while the 2015 Tet is only three days away. Photo: Tuoi Tre.

Nguyen Minh Anh, a cherry blossom peddler at the market, revealed that the lengthy hot climate and the tardy arrival of Tet with a lunar leap year have caused cherry trees to bloom well ahead of the holiday, thus plunging cherry blossom growers into heavy losses.

That does not chip away at the flowers’ bewitching beauty or the shoppers’ and visitors’ delight, however.

Many Hanoi natives and expat Vietnamese cannot do without a visit to the market ahead of Tet.

A cherry blossom and buds are pictured in close up. Photo: Tuoi Tre.

This is the first Tet in Vietnam that Chau and his wife, Giang, have spent with their little girl after three years working in France.

“Before leaving for France, my family and I would frequent Hang Luoc flower market, where the cozy Tet atmosphere is pervasive. We take our little daughter here to remind her of her home country’s traditional Tet,” Giang shared.

This is the first Tet in Vietnam that Chau and his wife, Giang, have spent with their little girl after three years working in France. Photo: Tuoi Tre.

Meanwhile, Bui The Nang, a Hanoi native, shared that though today’s Hang Luoc flower market is considerably more bustling than it was dozens of years ago against his preference, he goes there every year for a taste of the awesome cherry blossoms and the omnipresent Tet air.

Similarly, cherry blossoms are also a major draw at the ongoing Tet flower market at 23-9 Park in HCMC’s District 1.

The stalls also brim with shoppers and visitors, including international tourists, who admire the flowers and pose for photos.

Stall owners have thus hung signs requesting that photo posers pay VND5,000-10,000 (up to $0.5) each time in an attempt to put curb on the overwhelming photo taking activity, which keeps their potential customers from taking a close look at the flowering branches.