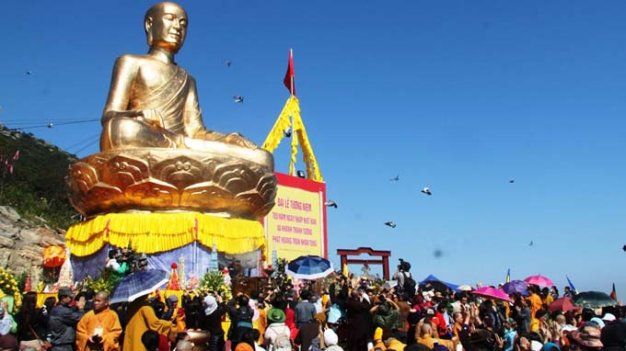 A major spring festival will offer a wide array of alluring activities, including air balloon rides, when it kicks off this weekend in northern Vietnam.

The Yen Tu Festival, a spring fest organized annually in Uong Bi City in the northern province of Quang Ninh, home to UNESCO-recognized Ha Long Bay, will begin on Saturday, or the 10th day of the Lunar New Year.

The festival will run until the end of the third lunar month.

Lao Dong (Labor) newspaper cited Vu Duc Yem, head of the Yen Tu Relic and National Forest Management, as saying that this year’s fest will feature several new highlights, including air balloon rides over the complex, which are being offered for the first time.

The festival opening will also include a ritual to hoist a Buddhist flag, which is 500m² in width, at the peaks of two adjacent mountains within the Yen Tu complex, Yem added.

Flocks of pilgrims and visitors are seen at the 2014 spring Yen Tu Festival. Photo: Tuoi Tre

Another highlight will be an exhibition of photos taken of the resplendent complex by veteran artist Do Giang, who is known for his aerial pictures of Ha Long Bay, designated as a UNESCO World Heritage Site in 1994, with its status extension granted in 2000.

Other features include a forest entrance opening rite which serves as a sideline activity, to be conducted on Friday, and a variety of folk games.

The entrance to the Yen Tu complex during the 2014 spring festival. Photo: Tuoi Tre

Though the festival opening is two days away, paths leading to the Yen Tu complex have been crammed with pilgrims and tourists for the past few days, Tuoi Tre (Youth) newspaper reported.

Progress is painfully slow in several sections of the paths leading to Yen Tu Mountain and Hoa Yen Pagoda, where part of the festival is held.    According to the complex’s management, it received nearly 120,000 tourists, including over 3,000 foreigners, within the Lunar New Year, which began on February 19 and was technically over on Monday.

This year’s Yen Tu Festival is expected to receive over two million visitors, including 2,500 Buddhist pilgrims.

King Tong and his two successors built hundreds of pagodas and shrines throughout the Yen Tu complex, including famous structures, which boast thousands of prized statues and artifacts.

The provincial authorities started preparing a dossier for UNESCO recognition of the complex as a World Heritage Site in December last year.

Visitors are seen rubbing small-denomination banknotes against a large bell hung at a pagoda within the Yen Tu complex during the 2014 spring festival in hopes of good luck in the Lunar New Year. Photo: Tuoi Tre

The province welcomed over 310,000 visits during this year’s Tet, a 15 percent year-on-year rise.