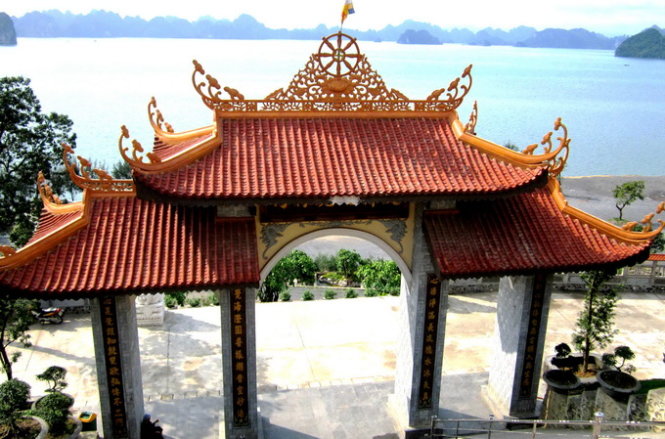 The path leading to the monastery is pristinely picturesque and adorned with lush pine forests and fields of richly-colored wild flowers.

The monastery was built in 2007 on the base of the former Phuc Linh Pagoda.

According to the monastery’s head monk, the former pagoda is where homage was paid to the highly-merited generals under the Tran Dynasty (1225-1400).

Buddhists are pictured during a praying session. Photo: Tuoi Tre

An impressive statue inside the monastery. Photo: Tuoi Tre

A statue of Bodhisattva of Compassion is seen with the resplendent Bai Tu Long Bay in its background. Photo: Tuoi Tre

Occupying an area of 6,000 square meters, the main edifice has two stories, where statues of different Buddhist deities and King Tran Nhan Tong, founder of Truc Lam Meditation, one of the country’s major Buddhist sects, are reverently placed and worshipped.

Its walls, shelves, and bells are filled with reliefs which depict the enlightening process made by Siddhartha Gautama – the Buddha – as well as his teachings and religious poems.

A Tuoi Tre (Youth) newspaper contributor observed from his recent trip to the monastery that security and tourist services in the area are rather good.

Visitors are also treated to vegetarian meals at the monastery.

From the second story of the monastery’s main edifice, one can enjoy a good view of the resplendent Bai Tu Long Bay.

Bai Tu Long seems to be overshadowed by its neighbor’s overwhelming fame, and its landscape remains pristine probably thanks to the lesser popularity.

Stunning, turquoise beaches around its many islands, including Co To, Quan Lan, Ngoc Vung, and Thang Loi, appeal greatly to first-time visitors and lure them to return.

Some of the islands are inhabited.

Tourists can catch buses at stations in Hanoi like My Dinh, Gia Lam, and Luong Yen to go to the monastery.

The buses, which run at a frequency of around eight to 10 rides each day, will take tourists to Cua Ong T-junction after a four-hour ride.

They then go by bus, taxi or “xe om” (motorbike taxi) to Van Don Port, and travel another 10 kilometers to the northeast before they reach Truc Lam Giac Tam Meditation Monastery.