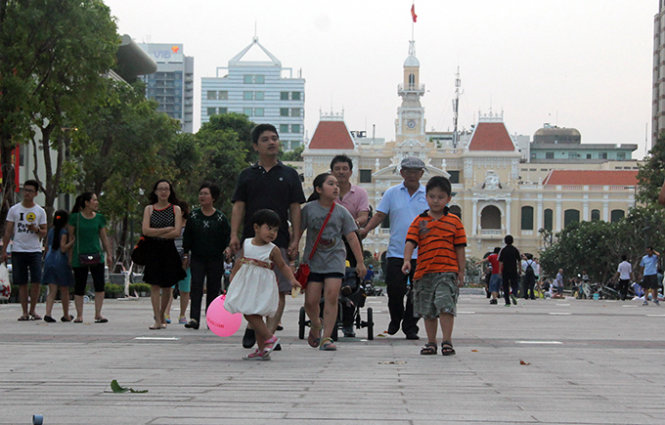 The Nguyen Hue Pedestrian Street in downtown Ho Chi Minh City, the city’s first of its kind, is open to the public on Wednesday, just in time for the Reunification Day, April 30.

Work on the long-awaited pedestrian street, located in District 1, has finally been complete, according to Nguyen Vinh Ninh, director of the HCMC Urban Traffic Management Zone No. 1 under the municipal Department of Transport.

Railings were removed from the street on Tuesday afternoon to welcome city dwellers and tourists, who were stunned by the trial-run  music-fluctuated water and decorative lighting spectacles.

To start with, the street will remain open to traffic, except trucks, on its two lateral sections, which border the pedestrian part in the heart, Ninh noted.

With a pyrotechnic show poised to glitter at 9:45 pm on Thursday, April 30, over the Bitexco Financial Tower- the city’s tallest which stands aloft in the downtown area, traffic will be banned from 8:00 pm to 10:30 pm that night on streets located within the firework venue’s belt, including Vo Van Kiet, Ton Duc Thang, Dong Khoi, Le Loi, and Pho Duc Chinh.

The firework show is part of the activities in commemoration of the Reunification Day, April 30 and Labor Day, May 1.

To ease heat and keep temperatures level, the entire length of the Nguyen Hue Pedestrian Street is installed with automatically-operated mist-emitting systems and lined with over 200 trees and 122 large tubs of flowering creepers, Ninh added.

Some hundreds of city dwellers and tourists were stunned by the trial-run music-fluctuated water and decorative lighting spectacles at the Nguyen Hue Pedestrian Street on April 28, 2015 evening. Photo: Tuoi Tre.

The walking street will also boast art, exhibition and sports activities, and will be lined with mobile stands that offer for sale a wide array of mementoes and food specialties.

The project investor said earlier this month that it would take some phases for the street to turn wholly pedestrian-only.

The parking areas, which are located in skyscrapers and sidewalks in the proximity, will offer services to visitors to the pedestrian street, and spectators of the firework show and other commemorative activities.