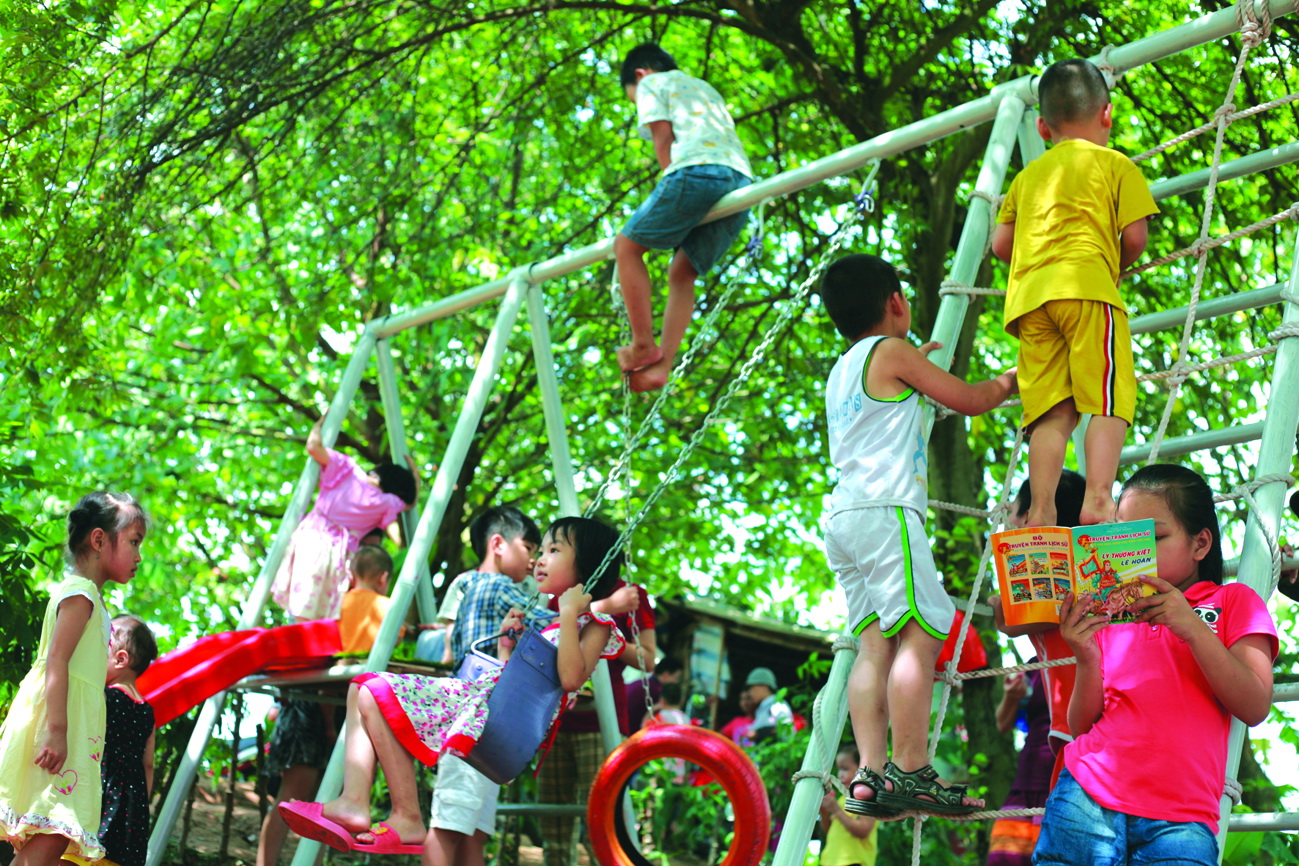 Groups of young Vietnamese have built free and low-cost playgrounds for children in Hanoi and elsewhere to beneficially engage them, particularly in summer time.

The playground establishment comes as timely help regarding the worrying lack of play space for children in several places across Vietnam.

Hanoi, for instance, is currently lacking in gardens and playgrounds in residential areas, which has an insidious effect on children’s lifestyle and recreational need, experts said at a conference early last month.

According to Tran Ngoc Chinh, chair of the Vietnam Urban Planning and Development Association, the shrinkage of parks and playgrounds in the capital is due to improper management by local authorities.

Space for gardens, parks, and sport grounds has typically been slimmed down or disappeared altogether and used for other purposes.

The remaining playgrounds in residential areas have sustained damage and turned unsafe and unsanitary for people, particularly children, to perform recreational activities there.

Statistics shown at the conference also proved the lack of recreational areas for people in Hanoi, evidenced by around 17,000 residents in Trung Phung Ward, Dong Da District sharing a playground of just 30m².

Areas for parks and gardens in the urban districts of Hanoi only account for 1.92 per cent of the total land, the conference heard.

Such shortage of outdoor play areas have left urban kids growing increasingly dependent on digital devices for leisurely activities, which has resulted in their imbalanced mental and physical growth and other issues.

Acutely aware of such problems, a group of young architects and volunteers called ‘Think Playgrounds’ have built eight low-cost play areas in several districts in Hanoi.

Their playgrounds are typically small plots of land sandwiched between apartment buildings or houses, or empty lots in ‘house boat’ neighborhoods like Phao (Lifebuoy) Hamlet or those residing along the Hong (Red) River in Long Bien District.

In May last year, the two young men grouped themselves into ‘Think Playgrounds,’ which was soon joined by several others.

The group members encountered immense hurdles ‘reclaiming’ public land from illegal occupants, who generally would not return the plots to public use.

Undaunted, these young people sought help from local authorities and residents in the neighborhoods to talk the illegal occupants into giving back the plots for the group to build playgrounds on.

‘Think Playgrounds’ formed their first playground for children of migrant workers or peddlers who call the alluvial ground along the Hong River home.

The playground, which cost over VND10 million (US$458), was open to the elation of kids and their parents, who would rest assured that their children will steer clear from perilous ‘water games’ in the river.

Another boy is intrigued in how to stay balanced on a revolving circular toy. Photo: Tuoi Tre

The project’s success spurred ‘Think Playgrounds’ members to several more play areas, which all make use of recycleable materials.

They make perfectly sure that the grounds all have a 20-centimeter thick sandy layer that can cushion young players’ falls or trips, and the used items are free of nails, or rugged texture that can cause scratches.

Nguyen Dang Duoc, head of Phao Hamlet, located in Long Bien District, told Tuoi Tre (Youth) newspaper that the new playground provides kids in his poor neighborhood with wholesome outdoor recreational activities, which they were mostly deprived of because their parents are always busy eking out a living on their sampans.

“It’s great that kids can become one with nature, play fun games, and role-play as farmers,” Phuong Lien, overseer of Tue Vien Organic Farm in Long Bien District, which also boasts such a play area, remarked.

With support from the Hanoi Old Quarter Management Board and HealthBridge, the ‘Think Playgrounds’ members piloted a mobile playground called Play Street on Dao Duy Tu Street, part of the foreigner-frequented Old Quarter in Hoan Kiem District, in mid-April.

The area is open to kids free of charge every Saturday evening until the end of this month.

A ‘Think Playgrounds’ volunteer is pictured recycling an automobile wheel into a toy. Photo: Tuoi Tre

The wheels are then half buried and get adorned by ‘Think Playgrounds’ members. Photo: Tuoi Tre

A used wood plank is turned into a plaything. Photo: Tuoi Tre

The group members have also built similar play grounds in some other provinces, including the outpost island of Ly Son, located off the central province of Quang Ngai.

In a similar vein, Ho Chi Han, an instructor from Nha Trang University, and his 10 students have erected a series of free playgrounds in several locales in the south-central province of Khanh Hoa over the last seven months.

The team has sought funding from domestic and foreign sources to run the playgrounds in the hope that children will not fix their eyes on games and the Internet anymore.

One of their latest play zones, which boast a wide array of toys made from recycled materials, is the one at the Dien Khanh Town Center for Children, which was put into use last month.

Similarly, Tran Thi Van, 70, head of Quarter 30 in Hanoi’s Dong Da District, defied opposition and turned a 112m² plot into a free playground for kids in the neighborhood.

Though the playground is small and the simple toys are mostly self-built from used items, scores of children in her quarter and others in the vicinity throng the place every afternoon and weekend.