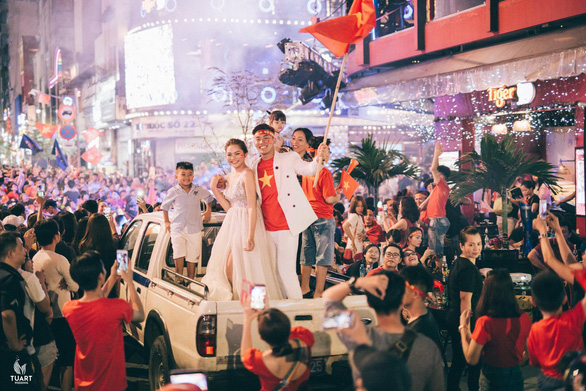 A wedding photo album of a young couple taken amid a sea of 'red fans' who celebrated Vietnam’s winning second AFF Cup on Saturday night has since gone viral on social media.

Anh Nam and Khanh Tien, both 23, decided to celebrate their love with a wedding, beginning with a photo album, just like every other couple.

But their sudden idea of taking the photos amid the wild celebrations of thousands of fans over Vietnam’s victory over Malaysia in the ASEAN Football Federation (AFF) Championship final has rendered their wedding photos popular with both online and ‘offline’ citizens.

Vietnam secured their first regional title in 2008 and after the final whistle on the weekend, the major streets in big cities and virtually any locality across the country were soon teeming with flag-waving fans.

On Saturday, Vietnam defeated Malaysia 3-2 on aggregate to lift the trophy for the second time on home soil in front of their own supporters.

Apparently, the couple had not planned for their wedding photoshoot to coincide with such a special occasion, according to Nam - the groom.

“At lunch, the photographers suggested the idea of shooting on the memorable evening,” he continued.

“I thought there’d be nothing better than enjoying the big ‘storm’ of Vietnam after a ten-year hiatus with my future wife.”

Nam therefore asked for his fiancé’s opinion on this idea, and to his surprise, the young woman agreed without hesitation.

For the young bride-to-be, like her future husband, Saturday night’s photo shoot was an unforgettable experience.

“The night of December 15 was the most memorable moment for us,” Tien said while recalling her experience that night.

“Moving between the crowded streets was a bit hard, but when everyone saw us taking pictures for our wedding, they gave way and even cheered for us."

The young couple and their team made it to the busy hubs in District 1, despite the crowded and wild celebration, to have the impressive takes.

Some pictures from Nam and Tien’s album had received more than 13,000 likes and reactions as of Tuesday morning, after they were posted on the Facebook page of the studio in charge of the photo shoot at midnight on Sunday.

Below are some of Nam and Tien’s wedding photos taken on the evening of December 15: