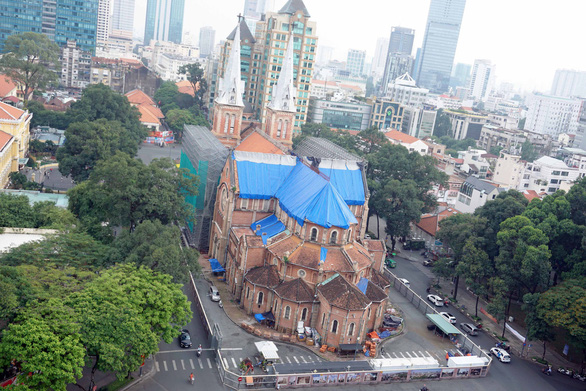 The renovation of Ho Chi Minh City’s iconic Notre-Dame Basilica, which began in mid-2017, needs to go on for another three years as the initially planned three-year restoration is not enough.

The restoration site also needs to be fenced to prevent members of the public from dirtying its walls, Father Ho Van Xuan, a representative of the archdiocese, said as he received Ho Chi Minh City chairman Nguyen Thanh Phong during the latter’s visit to the grand building on Wednesday afternoon.

A landmark of Saigon, the Notre-Dame Basilica has undergone a maintenance process since July 2017 as several parts of the century-old architecture showed signs of deterioration.

The restoration process is estimated to cost VND100 billion (US$4.41 million).

Built in 1877 and opened to the public in 1880, the 138-year-old church had not seen any major restoration before July last year.

Father Xuan said a new fence surrounding the architecture is essential, given that the grand building’s walls are often damaged by illicit drawing.

“It’s a pity [but we have to do that],” Father Xuan said, adding that the new fence will ensure the aesthetic and friendly appearance of the church.

During Wednesday’s meeting, the Notre-Dame Basilica representative also asked for chairman Phong’s opinion on extending the deadline for the church’s restoration by three years.

The US$4.4 million restoration was initially planned to take place from July 2017 to the end of 2019.

“But we had not expected so many difficulties at that time,” Father Xuan said.

“There are work components that we realized should be done slowly after we opened them for restoration,” he explained.

The European partners in charge of the restoration have reviewed the work and estimated that the soonest time the project can complete is by the end of 2023, according to Xuan.

“This is a work for life, so it cannot be rushed or done quickly,” he said.

Sharing Father Xuan’s view, chairman Phong agreed that an architecture as important as the Notre-Dame Cathedral should be carefully repaired to meticulous detail.

The city leader then instructed Father Xuan to contact the municipal department of construction for the extend of the restoration.

An extended restoration work means visitors to the city’s landmark will continue to be disappointed as the Saigon Notre-Dame Basilica won’t be ready to receive them in the next three years.