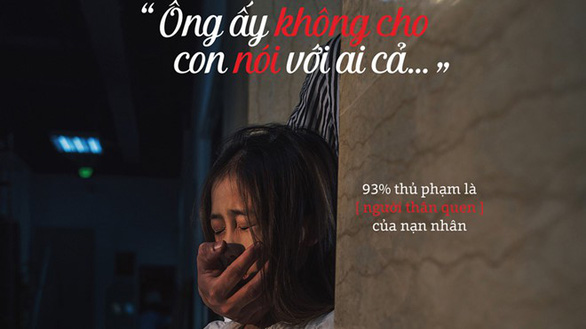 A project aimed at raising awareness on child sexual abuse in Vietnam has aroused controversy for displaying child models with pregnant bellies in haunting photos without covering their faces.

In the photos, girls in their preadolescence appear to be pregnant and either alone, in a small group, or interacting with their aggressors.

A look of terror and dismay is present on all of the subjects’ faces, highlighted by gloomy backgrounds.

The album is part of a communications project to “raise community awareness on sexual abuse against children”, SHINE Academy writes on Facebook.

“At first we were petrified by the idea [of children posing as pregnant], but it brought us joy to think about how we were doing our part to help protect other children through these photos,” Ngoc Linh, one of four child models who took part in the project, was quoted by SHINE Academy as saying.

Each photo also features a quote or statistical fact about child sexual abuse in Vietnam.

The album has been shared over 31,000 times and garnered more than 20,000 reactions on Facebook since it was first uploaded on the social media platform on Monday.

It has since attracted both criticism and praise, with controversy chiefly revolving around the fact that the child models do not have their faces censored despite the sensitivity of the topic in question.

“In photos of this nature, the underage subject often has their face blurred, covered, or completely hidden from sight,” said Dr. Nguyen Trong An, a child protection expert.

“When you capture a clear shot of the child models’ faces, their photos might be easily manipulated by ill-intentioned people to be posted on pornographic sites, making them a target for aggressors,” An explained.

Meanwhile, photographer Ha Dao said she considers the “over-dramatization” in the photo album “unnecessary”, as child sexual abuse does not always lead to visible outcomes such as pregnancies.

“The psychological trauma from unwanted hugs, kisses, and teases are often immeasurable and overlooked,” Dao said.

Photographer Maika Elan suggests that it is better for a community-minded project to offer solutions to the problem rather than simply raising awareness.

“Bad people exist everywhere, so it’s more important that we are equipped with knowledge to protect ourselves,” Elan said.

“We cannot wait forever for a perfect message to start raising our voice while our children remain unsafe in the real world,” he said.

Cong To, a TV host involved in the ‘Nhung Dua Tre Mang Bau’ project, said his team had considered all options before choosing to photograph the child models with their faces uncovered.

Hiding their faces could lead to “misunderstandings” that the subjects of their photos are real-life victims, To explained.

“All child models involved in this project completed two of our courses on self-defense against sexual abuse and fully understand the significance of the project as well as possible unwanted consequences,” To said.

“If any negative impact is caused by the project on these children, we are willing to pull the plug on it immediately,” he added.