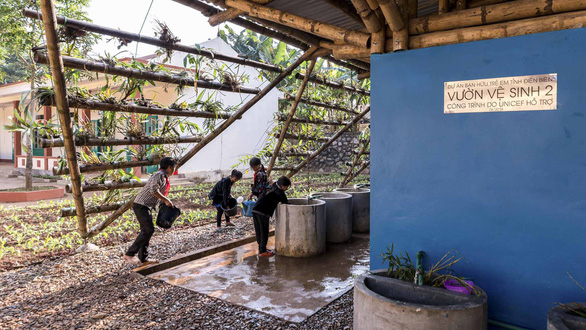 A young architect is changing the way children in Vietnam’s northern mountainous go about their daily hygiene by giving them a safe place to stay clean.

Ha, a 2012 graduate of the Hanoi University of Architecture, has received over 50 international awards for his innovative designs, including the “Friendly and Inclusive Spaces Award” presented by the International Union of Architects.

What sets Ha apart from other architects is his dedication to improving the daily lives and living conditions of low-income residents in Vietnam’s remote regions by designing something most people don’t typically associate with world-class architects: toilets.

Ten years ago Ha took a trip to northern Vietnam where he visited several mountainous villages in Cao Bang Province and had an up-close look at the daily lives and habits of Vietnam’s rural mountain folk.

What really struck him during the trip was the lack of access people living in these areas had to proper facilities for daily hygiene.

Rather than simply return home and go about his life, Ha wanted to seize the opportunity to make a difference in the lives of the children living there.

He began to formulate a plan for a ‘nature lavatory’ – a hygienic washroom and shower house he hoped to build amongst the trees in a local vegetable garden, fully equipped with facilities for both boys and girls as well as wind turbines and solar panels to ensure sustainability.

The residents of Cao Bang, however, were wary of such a project.

“They thought we were trying to illegally make use of their land,” Ha recalled. “Convincing them was a struggle.”

Eventually the residents gave in and, with funds secured from a grant awarded by the United Nations International Children’s Emergency Fund (UNICEF), Ha and his team got to work.

By using local materials and local labor to build the washroom, the project doubled as master class on sustainable, community-building development he hoped the locals would take to heart for future projects.

After successfully finishing the project in Cao Bang, Ha went on to build a similar lavatory in Dien Bien, another northern mountainous province, as well as several other projects aimed at improving the lives of Vietnam’s rural lower class.

These aren’t the first community projects Ha has undertaken.

In 2013 he helped design and build “To Am No Hoa” (Home of Happiness), a shelter for victims of natural disasters.

“People deserve a proper home where they can protect themselves from external problems,” he said.

And what does Ha get in return for all his charity work?  Happiness.

Nguyen Tri Thanh, the former head of the architecture department at the Hanoi University of Architecture put it best: “Ha doesn’t work for himself, he works for the millions of people out there.”