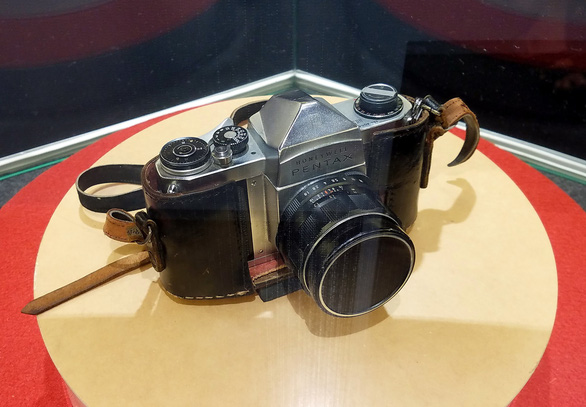 Vietnam-themed photos taken using one same camera - but 50 years apart - by a Argentinian war reporter and his granddaughter are being on display at an exhibition that opened in Ho Chi Minh City on Tuesday.

The photographic exhibition, “Stories from a Camera,” features 130 artifacts, photographs, and documents linked with Argentinian journalist Ignacio Ezcurra and his granddaughter Luisa Duggan.

Ezcurra volunteered to Vietnam during the American war in 1968, while Duggan made her first ever trip to the Southeast Asian country last year.

The opening ceremony of the exhibit was held yesterday at the War Remnants Museum, in collaboration with the Embassy of Argentina in Vietnam, in celebration of the Argentina Independence Day (July 9).

Ignacio Ezcurra was best known for his work as the correspondent covering the war in Vietnam for the Argentinian newspaper La Nación.

Ezcurra was active in many fierce battlefields from the north-central province of Thua Thien-Hue to Ho Chi Minh City during the Mau Than general offensive and uprising in spring 1968.

Mau Than is one of the largest military operations of the American war, involving surprise attacks by the National Liberation Front force and North Vietnamese People’s Army of Vietnam on South Vietnamese forces and the United States military and its allies, according to the Vietnam News Agency.

Ezcurra took photos about the war situation, as well as the daily life of local people during the wartime, with his Pentax Honeywell H3 camera.

He went missing in Saigon on May 8, 1968, just one month after his arrival in Vietnam.

Yet Ezcurra’s stories did not stop there, but have been continued by his descendant, Luisa Duggan.

Ezcurra’s family, including Duggan, decided to come to Vietnam in 2018, exactly 50 years after his disappearance.

Duggan captured what she saw during the family’s trip in Vietnam, using the very Pentax Honeywell H3 camera, one of Ezcurra’s few objects the family was able to keep hold of.

“The Pentax Honeywell H3 has always accompanied me on every journey since I was little,” Duggan told Tuoi Tre (Youth) newspaper about her 2018 trip to Vietnam, adding that the camera was the first thing she put into her luggage.

Upon her arrival in Vietnam, the granddaughter realized the Southeast Asian country is unlike what her family imagined as many years have gone since war destroyed the land.

“There are no enemies, only friendly, cheerful and affectionate people here,” she said.

The family also gifted Ezcurra’s memorabilia to the War Remnants Museum as a way of paying tribute to their beloved father and grandfather.

All these objects, together with the photos taken in Vietnam by the grandfather and granddaughter five decades apart, are now on display at the “Stories from a Camera” exhibition until August 30.

“This exhibition not only reflects historical, journalism and aesthetic values, but also plays an important emotional role in connecting the two ways the world sees Vietnam through one same camera,” said Argentine Ambassador to Vietnam Juan Carlos Valle Raleigh.

Duggan told Tuoi Tre that part of her family belongs to Vietnam, adding that they will return to the Southeast Asian country in the future to use “the camera’s lens to tell more stories about this place.”