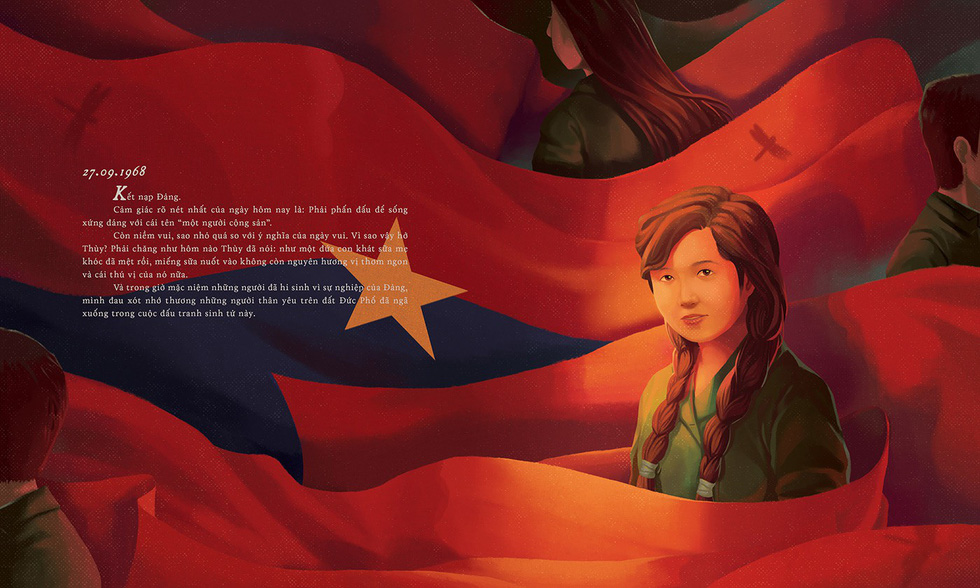 A senior architecture student in Ho Chi Minh City has chosen to illustrate a famous wartime diary of a late Vietnamese battlefield surgeon as his graduation project.

Nhat Ky Dang Thuy Tram, which chronicles the last two years of doctor Dang Thuy Tram when she worked on the battlefield in central Vietnam during the American war, was first published in Vietnam in 2005.

The wartime diary gained both domestic and international acclaim and has since been released in different languages, with the English title Last Night I Dreamed of Peace.

Seeing that the famous book has yet to have any illustrated edition, Nguyen Hoang Tan, a senior from the University of Architecture Ho Chi Minh City, decided to illustrate the best parts of the diary as the final assignment of his university life.

Tan told Tuoi Tre (Youth) newspaper that his work is focused on her journal written in 1968 and 1969, one of the most difficult periods of the American war in Vietnam.

He said that he had gotten a ton of work to do, having had to race against the clock to be able to finish the project in three months.

The illustrations were done in digital painting, combining real semi-descriptive shapes with a surrealistic context and layout.

The young man added he started his project with eagerness, believing that the motivating stories of doctor Dang Thuy Tram could reach younger readers more easily if the book has a more modern and attractive format.

An illustrated wartime diary may attract more readers, which means more Vietnamese will be inspired by Dang Thuy Tram, the student added.

Tan posted his project on Facebook on Monday, and the beautiful illustrations were quick to go viral and garner positive feedback online.

Born in 1942, doctor Dang Thuy Tram had worked at a field hospital in the central Vietnamese province of Quang Ngai in the late 1960s until she was killed trying to defend her patients during a gun battle in 1970.

During her time serving on the battlefield, Tram wrote diaries, which were her personal accounts and reflections on the cruelty and ruthlessness of the war.

Her diaries were found and preserved by a veteran American soldier after her death, and it was not until mid-2000 that they were brought back to Vietnam, leading to the publishing of Nhat Ky Dang Thuy Tram in 2005.

Tan said he has asked for the late doctor’s family for approval to have his graduation project commercially published.

If the publication of the first book can really be done, Tan will work on the second part, this time illustrating the last part of the diary, which is also the last year of the brave battlefield surgeon.

Below are some of Nguyen Hoang Tan’s illustrations: