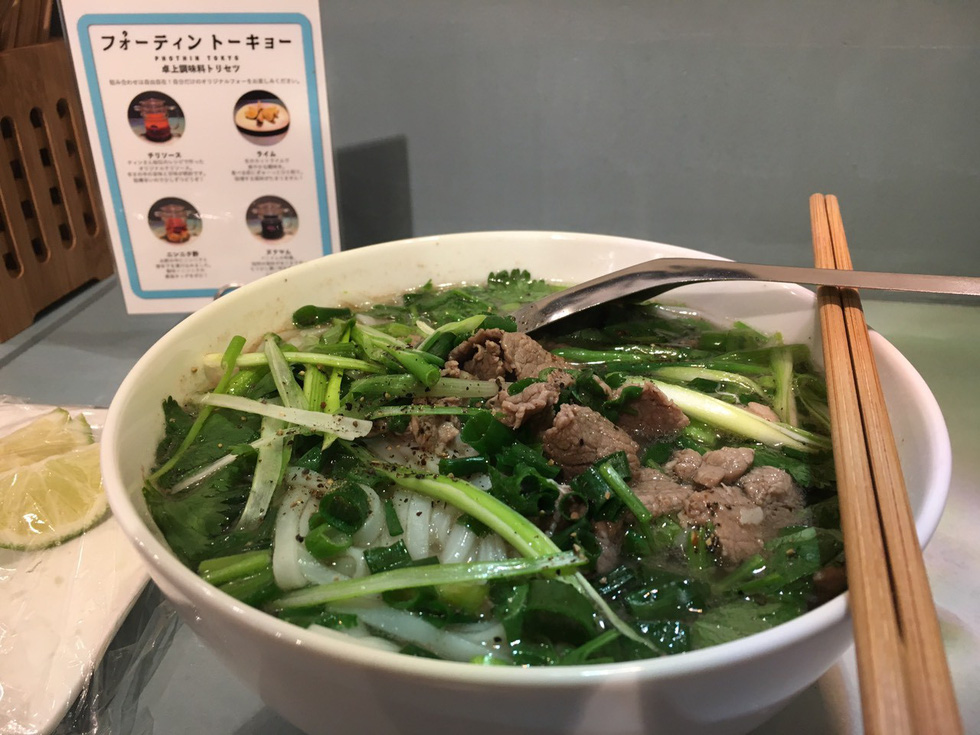 Pho, a signature Vietnamese dish of fresh rice noodles with broth and meat, has been popular with both Vietnamese and foreigners for decades.

Though thousands of restaurants across Vietnam serve the traditional dish, “Pho Thin” in Hanoi seems to have made the biggest impact on diners due to the delicate texture and exquisite fragrance of its broth.

The 20-seat restaurant is located in a small basement just three minutes from the busy Ikebukuro station and has been receiving acclaim from critics across the Japanses capital.

In an interview Tuoi Tre (Youth), Kenji shared that he first fell in love with pho during a visit to Vietnam several years ago and, since then, has hoped to promote this flavorful dish in his own country.

He also shared that Pho Thin Tokyo has become a hot restaurant in the Tokyo foodie scene since its grand opening, with diners queuing for hours to taste the restaurants signature Vietnamese noodle soup.

There are even time when the line is so long that customers only make it to the front to find that the restaurant has sold out for the day.

“On the grand opening day, we sold our first 100 bowls of pho in just one hour,” he said proudly.

“I had to go home with an empty stomach on the first day because the queue was too long, but I got lucky on my second try,” said Nhi, a Vietnamese diner.

Pho Thin Tokyo went viral on social media shortly after it opened in March and has since become one of Tokyo’s hottest destination for Vietnamese food lovers.

“It tastes exactly like the pho I had in Hanoi,” explained one customer.

Most of the restaurant’s visitors are Japanese and often show appreciation for the way in which Kenji has kept the flavors original – a distinctive difference between Pho Thin Tokyo and other pho restaurants in Japan.

According to Kenji, the rice noodles are all imported from Vietnam to recreate an exact imitation of Pho Thin’s original recipe.

“What surprised me most was the noodles. They were tender and smelled of actual rice, unlike at other pho houses [in Japan],” Nhi said.

As for the future,  Kenji said he plans to expand his shop’s opening hours into the evenings instead of just in the morning, and open several more locations throughout Japan, hoping to turn the dish into a top breakfast choice in Japan, just as it is in Vietnam.