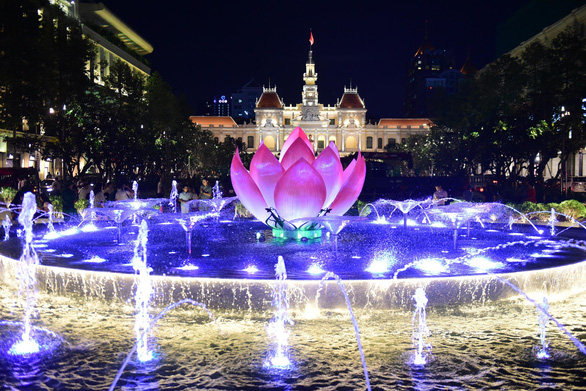 A new fountain was inaugurated on Nguyen Hue Pedestrian Street in downtown Ho Chi Minh City on Thursday evening, taking the same spot as an iconic fountain that had previously been demolished for construction of the street.

The new fountain, built at the intersection of Le Loi and Nguyen Hue Streets, took VND20 billion (US$863,000) and over four months to complete.

Construction of the fountain began in June as part of a project to upgrade Le Loi Street and nearby streets.

The structure includes water jets and lighting and audio systems which are used for water and light shows at night.

The highlight of the fountain is a giant pink crystal lotus bud at its center.

Another fountain surrounded by willow trees used to take the place of this newly-opened fountain.

The old fountain was demolished in 2014 for a project to transform Nguyen Hue into a pedestrian square.

A statue of late Vietnamese President Ho Chi Minh was also reopened on the walking street on Thursday evening after undergoing maintenance, according to local news site Infonet.