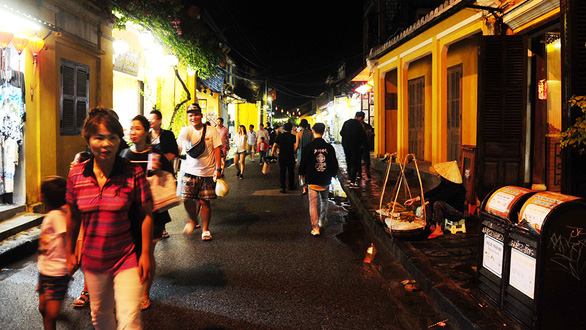 Authorities in Hoi An are one step closer to transforming the famous tourist city in the central province of Quang Nam into a cyclist friendly locale by announcing plans for a ‘no motor’ street near the city’s famed ancient town.

The People’s Committee of Hoi An City officially approved a plan to limit traffic on Phan Chu Trinh Street in Minh An Ward to just pedestrians and cyclists beginning on March 1, 2020 from 6:00 pm to 9:30 pm every weekday.

Hoi An became the first locality in Vietnam to introduce pedestrian-only streets in 2004.

As the UNESCO-recognized ancient town has seen a surge in popularity amongst tourists in recent years, local authorities have taken several measures to mitigate crowding, including expanding the ancient town's walking zone to include more than ten streets.

Such measures have been a hit, with tourism operators and local residents vocal in their support.

“Fewer streets with motorized vehicles mean an increase in peace and safety for visitors to the ancient town,” said Phan Xuan Thanh, chairman of the Quang Nam Tourism Association.

“We look forward to the implementation of Phan Chu Trinh Pedestrian Street because we believe that food businesses on the street will thrive once motorized vehicles are banned from it,” said Le Quang Trung, chairman of the People’s Committee of Minh An Ward.

According to Nguyen Van Son, Hoi An’s deputy chairman, the city has even set the more ambitious future target of becoming “a city of bikes” or “no-motor city.”

Turning Phan Chu Trinh Street into a cyclist zone is just the first step in realizing that goal.

“This idea is very big and a little ‘romanticized,’ but we are receiving a lot of support from local people and tourists,” Son said.