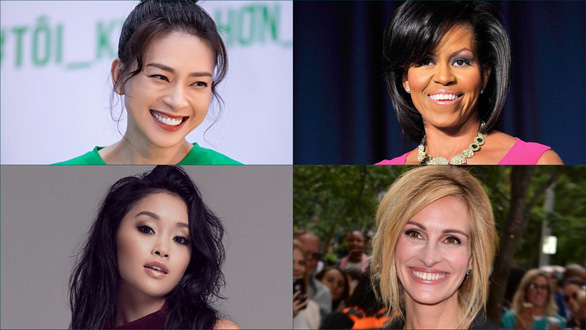 Former U.S. First Lady Michelle Obama and actress Julia Roberts are in Vietnam on behalf of the Obama Foundation’s Girls Opportunity Alliance on a trip to spotlight girls’ education.

The Obama Foundation is doing its first ‘Leaders: Asia-Pacific’ program in Kuala Lumpur, Malaysia from December 10 to 14, bringing together 200 leaders from 33 countries and territories in the Asia-Pacific region.

Participants, who come from the public, private, and non-profit sectors, will join plenary sessions, skill-building workshops, and leadership training in the inaugural program.

Prior to the gathering in Malaysia, Michelle Obama, Julia Roberts, and Lana Condor - a Vietnamese-American actress best known for her role as Lara Jean Covey in Netflix’s film series ‘To All the Boys I've Loved Before,’ are in Vietnam on Monday for activities ahead of their Malaysia program.

The three women, together with Vietnamese actress Ngo Thanh Van, have met with local girls' education organizations and beneficiaries of programs that help adolescent girls reach their full potential through education on Monday.

Specifically, Michelle Obama spent nearly four hours talking with local authorities and girls in Can Giuoc District in the southern province of Long An who engage in Room to Read, an international non-profit organization working on literacy and gender equality in education, mainly that of young girls.

She was also scheduled to pay a visit to Can Giuoc Elementary School alongside the three actresses.

In the meantime, the members in Michelle Obama’s delegation to Vietnam were slated to join a life skills training session for young girls organized by Room to Read.

Representatives of the office of the Obamas told local media that the former U.S. First Lady really looked forward to this trip to Vietnam, having prepared for it for a year as she wants to witness contributions to changes that the Obama Foundation is working on and to join the actresses in giving inspiration to local girls.

The office also announced before the Asian trip that Michelle Obama would donate more than US$500,000 from the sales of her memoir ‘Becoming’ between 2018 and 2019 to the Obama Foundation's Girls Opportunity Alliance Fund.

With a tight schedule, Michelle Obama would wrap up her activities in Vietnam and be heading for Malaysia on the same day.

According to the official schedule, Barack Obama will be in Malaysia for the ‘Leaders: Asia-Pacific’ program in Kuala Lumpur and speak at two separate events at the Singapore Expo in Singapore on December 16, but will not be traveling to Vietnam with his wife.

However, several pictures capturing the former U.S. president getting off a private jet at what is claimed to be Tan Son Nhat International Airport in Ho Chi Minh City surfaced on Vietnamese social media on Sunday night.

Tuoi Tre News has not been able to independently verify this report.

Barack Obama made a three-day visit to Vietnam when he was still in office in 2016.

The Obama Foundation, a non-profit organization founded in 2014, has been Barack and Michelle Obama’s major focus since the former U.S. president left office.

The Chicago-based organization is currently operated by Barack Obama’s younger half sister Maya Ng-Soetero and Tina Tchen, who served as his assistant and chief of staff to Michelle Obama.

The foundation launched its Girls Opportunity Alliance, a program seeking to empower adolescent girls around the world through education, allowing them to achieve their full potential and transform their families, communities, and countries, in 2018.